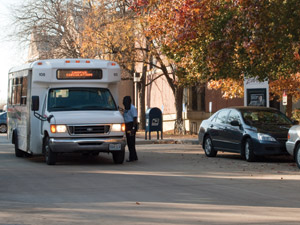 The Washington University campus circulator began following a revised timetable this week, after shuttle drivers and students raised concerns about the reliability of its schedule. The circulator bus, which previously ran every 16 minutes, will now run every 20 minutes, according to Stephanie Hunter, transportation operations supervisor in Parking and Transportation Services.

The new schedule, which went into effect Monday, allows drivers additional time to complete the route. Recent construction on the South 40 and Highway 40 has led to increased traffic congestion and made it harder for drivers to adhere to the previous timetable.

The shuttle drivers initially raised their concerns to Huntleigh Shuttleport, the company that provides the campus circulator, which then notified Hunter. Two weeks after Hunter was contacted by Huntleigh, she heard similar comments from junior Greg Schweizer, outgoing chair of the SU Campus Services Committee (C-Serve). Members of the committee had noted concerns about the reliability of the circulator.

“[The committee] decided that the priorities should be reliability over speed, so we suggested [to Hunter] that if it means making it a 20-minute interval instead of 16, it’s better if it’s reliable, even if it’s a little bit more time between stops,” Schweizer said of his committee’s recommendation.

Huntleigh tested the new timetable prior to implementing it, and “the drivers seem very happy with that,” Hunter said.

Freshman Candace Armour, who was not familiar with the old timetable, said, “[The circulator] can be reliable sometimes. I think it runs every 20 minutes.”

Sam Coster, a sophomore familiar with the old timetable, said the circulator used to deviate from the old schedule by three to four minutes, “which can be kind of a pain.”

Schweizer noted the importance of reliability as winter approaches.

“I know that students like to use the campus circulator when it gets snowy outside, and I don’t want to see any student waiting five, 10 minutes for a bus that doesn’t come and being late to class,” he said.

Members of C-Serve will be riding the circulator in the coming weeks to ensure compliance with the new timetable. The timetable has been updated on the Parking and Transportation Services Web site, and Hunter hopes residential advisors will disseminate the information to their residents.

Hunter also conducts periodic ride checks, but she noted that student feedback is the best way to raise concerns. She urged students to call or e-mail Parking and Transportation with complaints, saying, “Huntleigh is really pretty good about responding to our concerns, and I just want to know what’s going on so we can put the best product out there.”

Hunter checked with the Huntleigh supervisor following implementation of the new schedule, and she said that “drivers are liking the schedule and are making all of their time points right on schedule.”

The campus circulator provides service to the South 40, Mallinckrodt Center, the Skinker MetroLink station and the Millbrook Garage, adjacent to the Village. At present, there are no plans to revise the circulator schedule further, according to Hunter.

The Green Line is operated by Metro and will not be affected.