Chemical in red wine may be the key to longevity, study finds 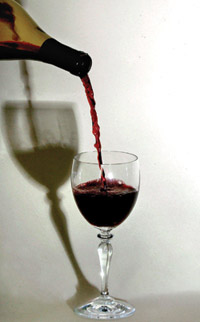 Researchers at the Washington University School of Medicine are studying resveratrol, a chemical found in red wine. Using resveratrol, which was found to decelerate aging in yeast and mice, researchers hope to reproduce the same results in humans. (Dan Honda | Contra Costa Times | MCT)

Only a decade ago, the thought of taking a pill to enhance longevity would have been equivalent for many to the idea of time travel, but now researchers at the Washington University School of Medicine are studying the active component of a timeless drink that may hold such a promise.

That drink is red wine, and the seemingly miraculous compound it contains is called resveratrol, a chemical substance found primarily in red grapes. Scientists began to ponder the health benefits of red wine after observing that French people, who drink wine at higher rates than people of other nations, had relatively lower rates of coronary heart disease despite their saturated fat-rich diet. Scientists also noticed that regular consumers of red wine in general have lower rates of cardiovascular disease and aging disorders such as Alzheimer’s disease.

Previous research has demonstrated decelerated aging and prolonged life in a variety of species, including yeast and mice via resveratrol, which is not yet fully understood. One popular hypothesis is that resveratrol activates a genetic pathway that transcribes a class of proteins called sirtuins, which are important for cellular regulation.

Samuel Klein, professor of medicine and nutritional science at the medical school, hopes to produce the same results in people. Using certain markers of aging for comparative purposes in his study, Klein is giving one group of volunteers a pill form of resveratrol and another group a placebo, and he is placing a third group on a reduced calorie regimen, which has also shown to elongate life span in mice.

Since aging reduces sensitivity to insulin, Klein and his team will observe insulin action in the liver, fat and muscle tissues to keep record of the aging process in his subjects. In addition, gene expression changes in these tissues will be noted because aging can contribute to gene aberrations. Another aspect the researchers will examine is the function of the mitochrondia, since this energy-producing organelle of the cell is known to lose efficiency with age.

The dosage of resveratrol used in the study is significantly higher than that found naturally in a glass of wine.

“The amount in wine is quite small compared to what we can deliver in pill form,” Klein said. “To get a comparable amount of this compound from wine alone, a person would need to drink about 600 bottles of wine per day.”

Currently, the study involves only post-menopausal women to ensure the lack of hormonal influence, but Klein’s team plans to broaden the subject pool once positive data is produced.