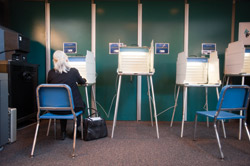 The proposition, which passed 65.3 percent to 34.7 percent, will ban smoking in public indoor places in St. Louis County in January 2011, with exemptions for casino floors, private clubs, smoking lounges at St. Louis airport, and some bars. The proposition’s passage also triggers a smoking ban in St. Louis that was passed by the city’s aldermen on Oct. 23.

“We have made a major step forward on cleaner air and obviously a healthy environment for our citizens in the county and city, and hopefully for the whole state in the future,” said County Councilwoman Barbara Fraser, D-University City, who introduced the St. Louis County Council bill that put the smoking ban on the ballot.

Proposition N opponent Bill Hannegan, though disappointed, downplayed the result, saying that “it was always going to be tough in the county” due to its low smoking rate.

Hannegan, who heads the group Keep St. Louis Free, added that “the fight’s not over” and that the opposition could challenge the constitutionality of the casino exemption, bring up a conflict between the two smoking bans and state law, or push to amend the city’s smoking ban.

Campaign leaders reported low traffic at polls throughout the county on Tuesday. Overall turnout was just under 20 percent, which was in line with county election officials’ predictions.

Students turned out in especially large numbers for the November 2008 election, but things were different this time around. Nearly all students when interviewed said they did not turn out to vote, despite most of them saying they supported the measure.

Senior James Mosbacher said it took him “three minutes, max” to cast his vote for Proposition N at his polling place, which he said was virtually empty.

“There was nobody there,” he said. “Absolutely nobody.”

The low turnout underscored the absence of a statewide or federal race on the ballot, an obstacle that campaign leaders attempted to overcome with last-minute mobilization efforts. Leaders from both sides said they called supporters on Tuesday in a final get-out-the-vote push.

Proposition N supporters gathered with posters and signs during the Monday rush hour at five street-side locations, including the intersection of Forest Park Parkway and Skinker Boulevard.

More than 200 Saint Louis University medical students and faculty gathered on their campus on Thursday to rally for the ban.

The Washington University community’s highest-profile supporter of the proposition is Martha Bhattacharya, postdoctoral fellow in developmental biology, who served as treasurer of pro-proposition County Citizens for Cleaner Air. Bhattacharya said last week she encouraged students to vote for the measure.

St. Louis Mayor Francis Slay even made an appeal on his blog on Monday for county voters to vote for the proposition, writing that the ban “will make St. Louis County restaurants safer for their employees and more pleasant for everyone else.” He also noted that the proposition’s passage would trigger the city’s own ban.

Hannegan said members of the opposition had distributed flyers to bars and restaurants in the days leading up to the election. Bowling alley proprietors also rallied against the proposition in Hazelwood on Saturday.

Most restaurant and bar owners opposed the proposition out of concerns that a smoking ban would violate their property rights and drive their smoking customers to nearby counties that lack smoking bans.

Ban supporters pointed to peer-reviewed studies showing that smoking bans have no negative impacts on business.

Proposition N passed even without the support of some health groups that stayed neutral due to the measure’s exemptions.

In a statement issued shortly after the votes were counted, the St. Louis chapter of the American Cancer Society did not back the smoking ban but said the measure’s passage “confirms that smoke-free laws are uniformly popular with the vast majority of the public and brings critical momentum toward achieving meaningful health protection from secondhand smoke for all people who live and work in St. Louis County.”

“The focus now will be on delivering health protection from secondhand smoke for those workers who still do not have it—those in bars and casinos,” the statement said.

Supporters had long argued that the ban, despite the exemptions, was a good start and was the only ban that would have passed the County Council.

“I would prefer if there were not exemptions, but the bottom line is you need to get something passed,” Stuart Slavin, associate dean for curriculum at SLU School of Medicine, said Monday at the Forest Park-Skinker rally.

Fraser’s bill passed as a result of compromise. The initial bill had no exemptions, but the council voted it down. A later version of the bill with the exemptions passed the council by a 4-3 vote on Aug. 25, following weeks of heated meetings.

The Aug. 4 meeting saw Robert Blaine, medical public policy specialist at the University, urge the council to put on the ballot “as broad and as comprehensive a ban as possible.” The University supported sending the final ban to voters but did not endorse the measure itself.