Bar will issue an apology, give workers diversity training 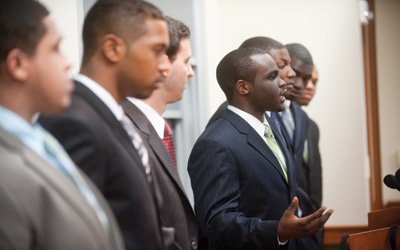 Senior Class President Fernando Cutz, along with the six black students who allege they were racially discriminated against by the Original Mothers bar in Chicago, said on Wednesday that they will not be pressing charges against Mothers, as part of a legal agreement between the two sides.

Cutz announced that Mothers will issue a public apology to the students, and managers at the bar will undergo diversity sensitivity and awareness training led by members of the Anti-Defamation League.

The students’ comments came in a news conference Wednesday afternoon in the Danforth University Center.

Mothers will also hold four charity fundraisers, three at the bar in Chicago and one in St. Louis. The students will determine what charity will receive funds from these events. Senior Class Treasurer Regis Murayi, one of the six students rejected from the bar, said the money will likely go toward a charity that works to promote awareness of race-related issues.

Cutz also announced at the conference that the Senior Class Council will be leading a “massive demonstration” against racial discrimination. The demonstration will occur in Chicago in late November and will include both University students and representatives from Mothers. Mothers managers will speak at the event.

Cutz told Student Life that he has met with representatives from Student Union about funding transportation for the event and that SU has agreed to pay for buses for all students interested in attending.

The students at the conference stressed that they are not seeking financial compensation from the bar.

“Nothing in the plans had anything to do with us getting financial compensation,” said senior Chuka Chike-Obi, one of the six black students.

Murayi emphasized that the students’ primary goal in the agreement was to raise awareness about race-related issues.

The students also announced at the conference that they are receiving free legal counsel from Covington and Burling LLP in their negotiations with Mothers.

According to Seth Tucker, the students’ attorney, the students and Mothers reached a settlement quickly. Negotiations lasted under 24 hours.

“I think it is a great result for both sides,” Tucker said. “It was a creative resolution. They have created a win-win settlement.”

If Mothers does not comply with the agreement, the students could still press charges. According to Tucker, this is an unlikely situation.

“I don’t expect them to break the agreement,” Tucker said. “They seem genuine and sincere.”
Mothers’ attorney, Brad Grayson of Strauss & Malk LLP said the bar is devoted to the agreement.

“My clients are very committed to going forward with the things we agreed upon with the students,” Grayson said.
Representatives from Mothers said in a statement that they are pleased with the agreement.

“We’re happy that it appears we have resolved differences with the students amicably and in a manner that promotes unity rather than division,” the statement said.

Cutz also said he is pleased with the agreement.

“Personally I’m satisfied with the way that things turned out,” Cutz said.

Although the six students are no longer pursuing litigation, city, state and federal investigations into the incident are still underway. According to Cutz, the agreement reached between the students and Mothers stipulated that the investigations would continue.

With additional reporting by Dan Woznica