Mother's Bar will apologize to the six students denied entry two weeks ago; no lawsuit will be filed. 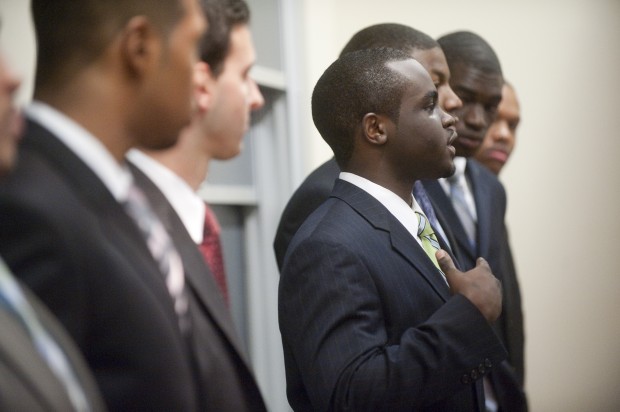 Senior Regis Murayi speaks at a news conference Wednesday in the Danforth University Center. Murayi is one of the six black students alleging race discrimination at a Chicago bar. (Matt Mitgang | Student Life)

Senior class president Fernando Cutz and the six black students who allege they were racially discriminated against by the Original Mothers bar in Chicago said at a news conference Wednesday that they will not be pressing charges against the establishment.

Cutz announced at the conference, held in the Danforth University Center, that the students have reached an agreement with the bar, and Mothers will issue a public apology to the students. Managers at the bar will undergo diversity sensitivity and awareness training. The students are receiving free legal counsel from Covington and Burling LLP in their negotiations with Mothers.

Mothers will also hold four charity fundraisers, three at the bar in Chicago and one in St. Louis. The students will determine the recipient of the funds. Senior Regis Murayi, one of the six black students rejected from the bar, said the funds will likely go toward a social justice-related cause.

“As this whole incident is about raising the issue about race relations in the United States, we think it’s very important to contribute to a fund or even a scholarship or organization, something to that matter, that would do the best to promote raising these types of issues,” Murayi said.

Cutz also announced at the conference that Senior Class Council will be leading a “massive demonstration” in Chicago in late November that will include both University students and representatives from Mothers.

Cutz said that Student Union will likely fund bus transportation for students to go to the event.

The students stressed at the conference that they are not seeking compensation from the bar.

“Nothing in the plans had anything to do with us getting financial compensation,” said senior Chuka Chike-Obi, one of the six black students.

“This isn’t power, this isn’t about leverage, this isn’t about fighting, kicking and screaming. This is about really raising the issue about racial discrimination in America and really opening this issue moving forward,” Murayi said.

Cutz said he is pleased with Mothers’ response.

“Personally I’m satisfied with the way that things turned out,” Cutz said.

-With additional reporting by Dan Woznica

This is a Student Life breaking news update. Check back soon for more information.