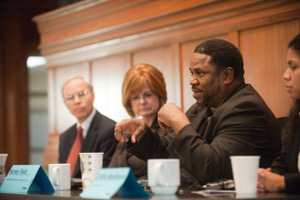 Amid a relaxed atmosphere, Controversy N’ Coffee and WU/FUSED hosted a multicultural panel on the topic of socioeconomic diversity to a group of nearly forty students Thursday evening.

The panel introduced the subject with a discussion of the University’s Pell Grant awards, leading into a larger conversation on socioeconomic diversity.

The University ranks lowest among the top 25 universities as a recipient of Pell Grants. This statistic is problematic and discourages many potential students from applying, some students said.

“A lot of my peers did not apply to Wash. U. because of upfront costs,” Woodhouse said.

The administration also acknowledged that many students do not apply due to tuition rates.

“People feel as though this is an expensive institution,” Henson said. “Overcoming that perception can be very challenging.”

Berg noted that the University’s low rank is due in part to the specificity of Pell Grant stipulations.

“Federal guidelines are very strict on who is eligible for a Pell Grant…If you fall literally one penny from the amount, you are not eligible,” he said. “We help many families that fall just above the Pell Grant guidelines to afford Washington University.”

Moreover, according to Berg, only 8 percent of students who are eligible for Pell Grants apply to top tier universities.

Panelists said socioeconomic diversity is a crucial topic for the University to address.

“We want to be at a university that is diverse in every sense of the word—that’s why we work [at WU],” Berg said.

“I think that compared to multicultural diversity and other initiatives, I don’t think that [socioeconomic diversity] is given the attention that it deserves, and I think it’s one of those often overlooked factors,” said sophomore Kellie Moore, internal vice president of CNC.

Students also expressed concern that opportunities for financial support are not well publicized, and few said they are aware of available financial help.

“Even though there have been initiatives toward promoting [opportunities], there’s always room for improvement, and we should definitely make more of an effort to promote awareness to our students of the financial resources available to them,” said sophomore Mariana Oliver, president of CNC and panel moderator.

Students in attendance said they were less than satisfied with the panel discussion.

“It was an informative session, but I felt like there was so much pre-decided conversation,” sophomore Baltazar Benavides said. “There wasn’t enough peppering back and forth between students and panelists, so some topics students wanted to hear weren’t even addressed. It was helpful overall, but I would have liked it if we could have gone into greater depth on a few issues.”

Freshman Jaclyn French agreed that the discussion did not delve far enough into the issue.

“I think that it could have gone a little bit deeper,” French said. “I think that a lot of the panelists were agreeing with each other and didn’t get to the meat of the issue, but it was definitely a good start.”

French emphasized the value of having a discussion about socioeconomic diversity on campus.

“At this caliber of university where there are a good deal of rich students, I think [socioeconomic diversity is] something that can easily be overlooked, and I think that it’s something there can be a stigma about,” she said. “I know that Wash. U. has a little bit of a stereotype of being a country club, so while there is a range of students, I think it could be more visible.”