Click here for updated information about the Mother’s Men

Washington University seniors on their class trip accused a Chicago nightclub of racial discrimination over the weekend, protesting nearby after the club allegedly denied entry to six black male students because of their race.

“I think it’s because we were a group of predominantly black men and they felt threatened,” said senior Blake Jones, one of the students who was not allowed into the bar.

About 200 Washington University seniors were attending Mother’s Night Club Original bar on Saturday night as part of their class trip to Chicago, sponsored by the Senior Class Council. According to Senior Class President Fernando Cutz, the six black students were told they would not be allowed in because of their failure to comply with the bar’s “baggy jeans” policy. A few white students who had already been admitted then came out to demonstrate that their jeans were more “baggy,” but the black students were still denied admission.

The six students offered to change their clothes, but the bar manager still refused to allow them in. The white students were allowed to return.

The management at Mother’s did not immediately return phone calls from Student Life seeking comment.

Two of the students rejected from the club were Iboro Umana and Regis Murayi, the internal vice president and treasurer of Senior Class Council, respectively. Both of these students were heavily involved in the planning of the trip.

Hundreds of Washington University in St. Louis seniors held signs on Sunday morning in protest of the discrimination of six black students who were denied entrance to Mother's Night Club Original bar on Saturday night. (Scott Bressler | Campus in Focus)

Murayi said he felt the manager was unwilling to listen to what he and the other five students denied entry had to say.

“From talking to him, I felt that no matter what I said, he already knew his agenda, he knew his plan. It was hard to get him to budge from that,” Murayi said. “It was not about the baggy clothing. It was strictly about the people I was with.”

Other students who went to the bar said they disapproved of the way Mother’s treated the six students.

“Honestly, if I’d known that [they] weren’t allowed, I wouldn’t have wanted to be there either,” senior Tara Benesch said.

Students protest near bar the next morning

In response to the incident, students staged a 15-minute protest Sunday morning outside the Hotel Indigo, which is near the bar and is where the seniors had been staying for the weekend. The students gathered there because they were unable get the proper permits to protest outside the bar.

The protest occurred at 11 a.m., the original scheduled time for the seniors’ departure to St. Louis.

Students at the protest held signs and flyers with slogans like, “Mothers don’t hate.”

“It was really kind of a unique mix of emotions at the protest,” senior Kim Halom said. “It was definitely a somber, serious time, but even more than that people were trying to process how ludicrous it was that this had happened the night before.” 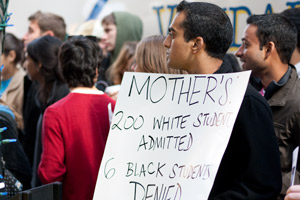 Senior Kashyap Tadisina was among hundreds of Washington University seniors Sunday protesting the alleged discrimination of six black students at a local Chicago bar the night prior. (Lionel Sobhart | Campus in Focus)

Students said the experience shows the reality of life outside Wash. U.

Senior class president Cutz said he has not seen this kind of an incident of discrimination before.

“I thought I was very well informed, I thought I was aware. But I had never been direct eyewitness of a clear-cut event of racism, at least not of such good friends of mine,” Cutz said.

Cutz said the Senior Class Council wants to spread awareness that such acts of discrimination do occur, as well as to discourage future business at Mother’s.

Cutz issued a press release with facts about the event to 26 different news outlets, diversity leaders and senior class presidents at Chicago universities, as well as to the NAACP.

Murayi, for his part, said the incident is nothing new. He said he has experienced similar treatment at other venues prior to the trip.

With additional reporting from Chicago by Michelle Stein

Click here for updated information about the Mother’s Men