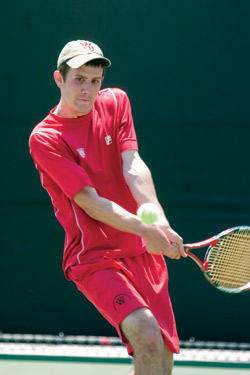 Senior John Watts added another line to the already remarkable list of accomplishments in his career, capturing the ITA Division III Men’s Singles Championship for the second time in the last four years, without dropping a set.

“It was great to win the tournament,” Watts said. “It was a fantastic feeling when I was done with my finals match [Saturday] morning.”

Watts, coming off a first-place finish at the ITA Regional Tournament three weeks ago, has never stopped working this season to be ready for big tournaments like this one. “This year we worked on his slice, mostly his backhand slice, and we worked on his drop shot,” head coach Roger Follmer said. “He used a little bit of both this weekend, which he needed to do because he was pushed more here than he has been [recently].”

In the tournament, which took place in Mobile, Ala., Watts defeated Andy Peters of Middlebury in the finals in straight sets (6-3, 6-4), but he insists that the match was closer than the score indicates.

“I tried to mix up my game. I served pretty well, I came to the net and put him away at net,” Watts said. “A few little points here and there made a big difference.” Watts also dispatched Dillon Pottish of Emory (7-5, 6-0) and Hayden White of Washington and Lee (6-0, 6-2) en route to the finals.

Despite dropping their first match of the tournament to eventual runner-ups Dillon Pottish and Chris Goodwin of Emory, the doubles duo of juniors Isaac Stein and Max Woods won their next two matches on their way to securing fifth place in the field of eight teams.

“The first match didn’t turn out the way we wanted it to, but we knew no matter what happened we had two more matches left,” Stein said. “There was no point in just folding, giving up, so we woke up Friday morning and said, ‘All right, well, the best we can do is fifth, so let’s go out and do it.’”

Stein and Woods have attributed their success on the doubles circuit this year to their experience playing together. “I think we mesh very well together,” Woods said. “Our complementary playing styles help us out a lot.”

“Playing with each other since freshman year, there is this unspoken relationship that I really can’t describe,” Stein said. “We have played so many matches together over three years that we really have an advantage over a team that has only played together for one year.”

Follmer has confidence in these two juniors because of their balanced attack, but he still tries to make each player work on the weaker parts of his game so they can improve as a team.

Follmer also stressed the familiarity among doubles partners as an important key for success.

“When you play with someone a lot, you get used to how to help them when they aren’t playing well and how to find a way to win because you communicate each point,” Follmer said. “The fact that those guys have played together since their freshman year—that’s a big advantage that they have over most teams here.”

In preparation for the spring, the team agrees that being able to stay fresh late in matches will be crucial in reaching next level of competitiveness.

“Fitness is a big part of the game,” said Woods. “If you aren’t in tip-top shape, it really hurts.”

The Bears resume play in early 2010 for the start of the spring season.