Student farmers off to a busy harvest season 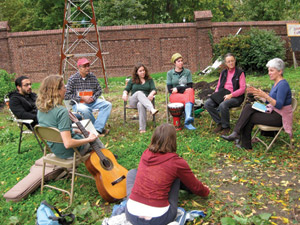 The October harvest is under way, and with it has come a burst of student farming activities, both on campus and off. Members of the Burning Kumquat, the University’s student-run farming group, have been working to engage the student body and St. Louis-area community in all things agricultural.

In addition to gardening on the South 40 on Saturday mornings, members of the Burning Kumquat have tabled at major St. Louis farming events. Last week, for example, group members tabled at the Homegrown Urban Country Fair at the Tower Grove Park Farmers’ Market.

At the market, members of the group led food-related games, including a radish relay and a modified version of Iron Chef in which participants decorated plates with herbs.

According to senior Jen Swanson, a member of the Burning Kumquat, students’ presence at the event signaled young peoples’ interest in farming to others at the fair.

“What we brought to the market was a youthful energy of local farming,” Swanson said.

“Our age-bracket wasn’t very well represented,” Koopersmith said. “And so that’s part of why we were there, just to show some sort of excitement.”

At Farm Aid, Kumquat members joined other farmers, beekeepers, and food activists in tabling outside the concert arena.

A morning with Mollie

The visit began with a breakfast attended by Katzen, members of the Burning Kumquat and others. Those in attendance dined on pumpkin bread and other breakfast pastries.

Junior Lael Bialek, who won a ticket to the breakfast through a Campus Bookstore drawing, said meeting Katzen was a rewarding experience.

“I grew up eating her recipes, and they’re still among my favorite things to eat,” Bialek said.

Later in the day, Katzen signed books in the DUC, and even spent time at a farm party at the Burning Kumquat’s campus garden.

“I think [the garden is] where she felt the most comfortable all day, because that’s what she does. She gardens,” Swanson said.

Last week, online news reporting and editorial Web site The Daily Beast ranked the University as one of the “15 best colleges to eat at,” and cited Katzen’s visit as evidence that the school takes food seriously.

“Katzen’s visit is the latest in an ongoing effort by the school to teach students about healthier eating and using more local ingredients,” the article said.

Bon Appétit general manager Nadeem Siddiqui, who was quoted in the article, says Dining Services is a large part of this move toward healthier local farming.

According to Siddiqui, the University sources around 25 percent of its food from 21 local farms, including the Kumquat’s.

The Daily Beast article also cited a summer camp run by members of The Burning Kumquat, called Camp Kumquat, as an example of the importance of homegrown food on campus.

Camp Kumquat, a five-day-a-week camp run for the first time this past summer, brought in inner-city St. Louis children, aged 10 to 12, to work and play on the farm.

Swanson says the Kumquat’s commitment to local, self-sustaining agriculture is something that a growing number of University students have become interested in.

“There’s been this groundswell of raised awareness about food in general, even over the two years since we’ve started,” Swanson said. “Everyone’s starting to question, ‘What is industrial agriculture, is it really the way of the future, and are there alternatives?’”

Members of The Burning Kumquat farm on the South 40 from 9 a.m. to 1 p.m. on Saturdays.