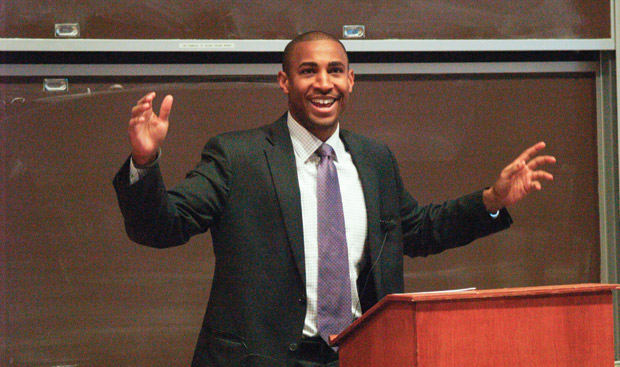 A high-level White House official who graduated from Washington University and served in Student Union returned to campus to speak on Friday, encouraging students to fight adversity in pursuit of their goals.

Jason Green, a 2003 graduate who is now deputy associate general counsel to President Barack Obama, spoke to about 100 students, faculty and alumni in an Assembly Series speech that served as the kickoff event for the first-ever SU Reunion. SU leaders from as far back as the Class of 1972 attended the reunion.

During his speech, Green encouraged students to find what they valued most and pursue it, while acknowledging the challenges that may present themselves.

“I don’t think it comes as any surprise that the things we cherish most have come at some cost, with some hard work,” Green said. “I believe that’s specifically why we pursue them—because the easy can be accomplished by anyone; we pursue the difficult precisely because we can’t.”

During his time at the University, Green served as an SU senator, SU vice president and senior class president. He was also the student speaker at Commencement.

After graduating from the University with a double major in political science and finance, Green worked as a paralegal before serving as regional field director in Maryland for John Kerry’s presidential campaign in 2004. Green followed that by working as field director for Doug Duncan’s campaign for governor of Maryland before entering Yale Law School.

Jill Carnaghi, associate vice chancellor for students and dean of campus life, said Green represents someone who has consistently demonstrated leadership, both as an undergrad and throughout his career. Carnaghi hopes that students will take away Green’s broader message.

“I want each student to figure out what they view as a quality experience, what they view as leading lives of purpose and meaning,” Carnaghi said. “There’s not one way to exhibit leadership and service to the community.”

Green agreed with this sentiment in his speech.

“Wash. U. affords many opportunities that don’t just reside in SU, so from now I say for you to find your own measures of success, and pursue what you love,” he said. “The leader figure post, whichever area you choose to focus on, is not as important as you choosing to give of your time and talents of this place, so we are better off for you having been here.”

Among the numerous students in attendance were current SU leaders who picked up on different parts of the story, both as regards the past and future of SU.

“I think it’s cool to see someone who was in the same position that we are and see them do such exciting things now,” said senior Chase Sackett, speaker of the Senate. “It’s funny how we’re seven or eight years later and we’re still dealing with the same issues, the same challenges.”

Other students also had positive reactions to Green.

“I just think that a lot of us have these really high aspirations for what we want to do, and it was just really inspiring to see someone who actually showed some of his goals, and it makes me think, ‘Oh maybe I can do what I want to do too,’” said junior Robyn Michaelson, an SU senator.