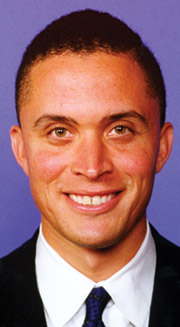 Ford is now a vice chairman at Merrill Lynch, a member of the Council on Foreign Relations and chair of the Democratic Leadership Council, an organization that fosters a moderate approach to economic reform. Ford is also a regular contributor to NBC and MSNBC.

Ford, who is African American, was once referred to as the “walking, living embodiment of where America ought to go” by former President Bill Clinton, and he served in the House of Representatives from 1997 until 2007. In 2005, he announced he would run for Senate.

In October 2006, polls indicated that Ford was slightly ahead of his Republican competitor, Bob Corker. The Republican Party subsequently ran a television advertisement in which a Caucasian woman talks about meeting Ford, who was unmarried at the time, at “the Playboy party.” Many viewed this ad as an appeal to racist sentiment, and Ford subsequently fell behind in the polls.

In his talk at the Assembly Series, Ford did not focus on this setback but instead chose to highlight his entry into national politics. In particular, he addressed the difficulties he faced as a 25-year-old third-year law student at the University of Michigan when he made his first run for Congress.

“We had to create the settings and the campaign opportunities,” Ford said. “We would find ourselves at intersections and thoroughfares at different times of the mornings and evenings when people were getting off of work.”

Ford told several anecdotes, including one in which his elementary-school teacher arranged for him to speak at 35 graduations. Even though these graduations were comprised of 32 kindergarten graduations and three elementary school graduations, he pushed on.

“I never would have thought at that moment that those instances, that those opportunities which seemed to me at the time to have no relevance, no bearing, no impact on the outcome of the election because the audience couldn’t vote that it would have any impact on the way voters would think,” Ford said. “It was a great lesson in many fronts.”

In addition to addressing his experiences running for office and serving in the House of Representatives, Ford also commented on the current state of electoral fundraising.

“Money is more prevalent in politics today because there are more people giving it today than ever before,” Ford said.

Ford proposed a plan in which representatives and senators would be encouraged not to raise money for the first half of their terms.

“I think one of the great things you can do as it relates to money and politics is make a very simple change,” Ford said. “When you’re elected to Congress or the Senate, the first year in Congress and the first three years in the Senate you can’t raise a dime. If you raise any money your first year or during the course of your first three years in the Senate, taxpayers will create an account for a fictitious candidate and throw $1.25 for every dollar the incumbent raises for a fictitious candidate or someone who may decide to run down the line.”

Ford closed by addressing the discipline his grandmother taught him and how such discipline could be applied to politics.

“My grandmother taught me the difference between what was right and what was wrong,” Ford said.

“I got to thinking about not only what is right today, but tomorrow. The more they [politicians] can combine the right and the wrong today in thinking about tomorrow, the more ethics there will be in government, and more important, the outcomes will be more ethical, more moral and for that matter, more effective going forward.”