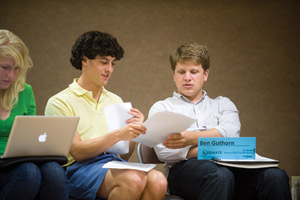 Last Wednesday saw the appointment of the seventh new senator to Student Union this term, calling to attention the unusually large number of resignations. The Senate body, composed of 26 members, lost six of its original senators before the semester even started.

Senators take office in the spring when they, along with members of the Treasury, prepare the next year’s budget.

Senior Ben Guthorn, a representative from the Sam Fox School of Design & Visual Arts, was the most recent to resign. Originally a write-in candidate, Guthorn always viewed his position as temporary. When he had the opportunity to serve as president of the Art School Council, he stepped down from his Senate position.

“With the start of the new school year, the opportunity to install two new freshmen as the College of Art Senators presented itself. I see this to be the best for a body who often sees many fall by the wayside,” Guthorn wrote in an e-mail to Student Life.

When there is a vacancy, the school’s council sends an e-mail to every student in that respective school urging them to apply.

Senior Chase Sackett, the speaker of the Senate, said he believes that most senators—especially those who leave over the summer—simply have realized that Senate will not fit into their schedules.

“It’s really just people looking at their schedule and realizing that ‘I really want to do this, but I want to give it my all and I just don’t have time to do that,’” Sackett said. “They’re students first.”

This was certainly the case for senior Jennifer Sisto, a former senator who resigned over the summer. Sisto was offered an internship at BJC Healthcare over the summer and was asked to continue into the fall and put in 20 hours a week.

“You have to put a lot of time into it, and you can do really good things on Senate, and I felt like I didn’t have enough time to devote to it to actually make the position useful for myself,” Sisto said.

With weekly Senate meetings running an average of two hours, in addition to committee meetings, liaison meetings and outreach, she felt she simply did not have the time.

Sackett said time was an issue for many who resigned over the summer after realizing they needed to commit more to their academics. One of the former senators who resigned went abroad.

Other reasons for resignation

One senator said he resigned because he was unhappy with his experiences in the body.

Sophomore Neil Shah was elected in November 2008 for a yearlong term and resigned over the summer after serving for one semester.

“Oftentimes, I found myself questioning to what extent the time I spent in meetings translated into benefit for the student body,” Shah wrote in an e-mail to Student Life. “I think legislators should have a genuine passion for their work, and that feeling was something that I wasn’t fortunate to experience in Senate.”

Shah wrote he still thinks that Student Union has good objectives; he just found himself frustrated with the process.

“Student Union is an extremely bright and dedicated group of individuals, and they were a pleasure to work with,” Shah wrote. “It was more because I didn’t necessarily like the legislative process and felt that it was too slow and oftentimes inefficient.”

Despite the string of resignations, Sackett said he does not see any inherent problems with Senate.

“My overall sentiment on it is that it has not been a problem, and it’s also not a huge proportion of the Senate body,” he said.

Mike Post, a junior in his third Senate term, said he believes the resignations do disrupt the flow of Senate.

“A lot of people who fill in seats bring a lot of energy to the group. It does disrupt the continuity,” Post said. “The relationship that was built over the last year doesn’t need to be rebuilt, but there’s a bit of a lag.”

The real problem, according to Post, is that someone was willing to go through a vigorous campaign process but not stay with the group.

“You, at one point, liked the idea of Senate and concept of Senate, and you liked what you were doing, so what happened from then until now that makes you want to resign? If it’s personal reasons, then so be it,” Post said. “If it’s about Senate, we want to know what it is so we can fix it. To me, that’s the frustration.”