Anonymous posters in Lopata Hall criticizing the cost and environmental impact of flat screen TVs prompted the engineering school to reduce the screens’ hours of operation. 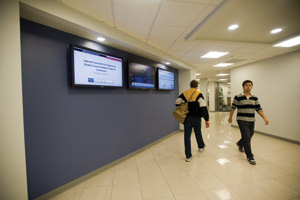 Following a silent demonstration from an anonymous party, the Washington University School of Engineering and Applied Science has pledged to cut down the amount of time it operates several flat-screen televisions in its buildings.

The engineering school primarily uses the flat-screens to display information or promotional slides from administrators and students or cable television programs. Three of them sit prominently across the main entrance to Lopata Hall.

Two weeks ago, several signs of protest—printed simply in black font on white paper—were posted anonymously on the screens inside Lopata. The signs noted the high price and operating cost of the flat screens and questioned the University’s decision to spend money on the screens, given the current economic climate.

“The signs did prompt us to look at how long the screens are on, and we are initiating a new policy that the screens will be on from 8 a.m to 6 p.m.,” said Nick Benassi, associate dean for the engineering school.

Benassi said this time is the highest traffic period in front of the screens. The screens will also be turned off on weekends and holidays.

Senior Dan Brewster, president of EnCouncil, supports the engineering school’s decision to reduce the screens’ hours of operation. But Brewster said he feels most students are not opposed to the screens.

“People don’t really have an issue with it, and I think that most people notice the screens and maybe appreciate having the information there, but they don’t have an actual issue with it,” Brewster said. “We hope that if they did, they’d come talk to us about it before just doing random things that aren’t going to get them anywhere.”

Junior Sam Fok said the screens “do a good job of informing people about what the school is all about.” But he also expressed some disagreement with the school’s decision to reduce the screens’ hours of operation.

“Since they’re there already, I think we might as well make full use of them,” Fok said. “I don’t know if they need all three screens in the entrance of Lopata, but having the media there that is readily adaptable is useful.”

“No one looks at bulletin boards. There’s a lot of paper that gets wasted on them, so the school wanted to go in this direction,” he said. “By having the screens up there, the engineering school is able to get its messages out.”

But some students said even the screens fail to grab their attention.

“I think it’s good that the screens save a lot of paper, but I don’t ever really look at them, and I don’t look at the paper either, for that matter,” sophomore Michael Laks said.

Both Brewster and Benassi emphasized the flat-screen televisions’ potential for making the University more sustainable, compared to the bulletin boards that had been used in the past.

“The school feels that it can cut down on the amount of paper it uses,” Brewster said. “By using those screens, it can improve communication to students, faculty, staff, everyone who walks through that lobby a couple times a day.”

“It’s a great way to get messages out when they want to,” he added.

Benassi echoed Brewster’s belief that using the screens will be a more environmentally friendly and cost-efficient practice for the school.

“[The screens are] saving paper and expenses related to producing the paper,” Benassi said. “A student can do one electronic Powerpoint slide and send it to us, so we can distribute it to many locations.”

Benassi also emphasized the importance of the screens for prospective students of the engineering school, who start their tour in the lobby of Lopata.

“We have the two different audiences—visiting prospective students and parents can catch a glimpse of the school while they’re waiting for their tours and for the internal students can learn about what’s going on.”