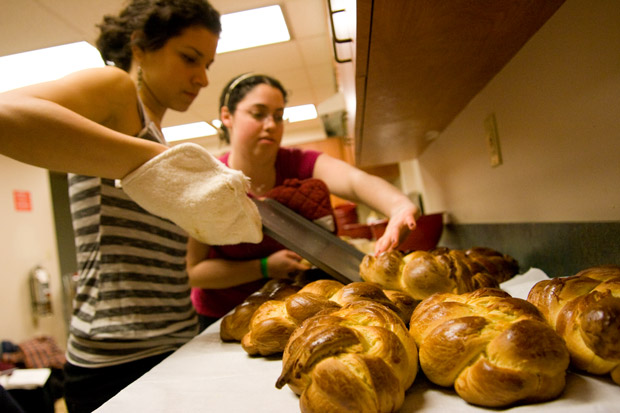 Current sophomores Hannah Schaffer and Elana Nemitoff prepare challah in the Mudd kitchens last year. Challah for Hunger, a social action group that sold challah to raise money for charity, has been unable to bake on campus this year because of health regulations. (Sam Guzik | Student Life)

In order to sell baked good on campus this year, students will need to use commercial, department of health-certified ovens.

Although the announcement of this policy coincided with the outbreak of H1N1, Paul Schimmele, assistant to the director of operations in Dining Services, said that the timing is merely a coincidence.

The policy switch was prompted after a student group contacted the St. Louis County Health Department with questions on how to properly handle food.

The University was contacted and subsequently reexamined its own policies on how student groups should handle food in order to abide by county health guidelines.

This change led to a ban on the sale of food cooked in non-commercially-certified ovens.

“We don’t determine where the food is coming from, but if we’re staying within health department guidelines, it has to come from a commercial operation, or at least something that is certified by the health department as meeting those standards,” Schimmele said.

Student groups have been severely affected by the new policy, most notably Challah for Hunger, which bakes challah using campus ovens. The new policy forbids them from selling challah not bought from stores or cooked in commercial-grade ovens.

“It completely disbanded the organization,” sophomore Hannah Shaffer, co-president of Challah for Hunger, said last Wednesday. “We now have nowhere to bake.”

Since Shaffer said it is not economically feasible for the group to purchase challah from a store, the student group will have to resort to finding a certified off-campus kitchen to bake challah.

Although Hillel has a commercial-grade kitchen for baking kosher food, using the kitchen to bake would be too much of a liability issue for a student group to use, according to Schimmele, since the kitchen is maintained by the University and not Hillel.

“Commercial-grade equipment is expensive and needs to be maintained at a particular level,” Schimmele said. “It’s not something we can let anyone use.”

Shaffer, however, is confident that Challah for Hunger will be able to use the ovens in the either the Reform Synagogue in the Central West End or the Conservative Shaare Zedek Synagogue in University City.

“I feel much more confident about the future of Challah for Hunger now than I did earlier,” Shaffer said.

Schimmele acknowledged the health department’s guidelines, and said that the University must abide by health regulation laws.

“When you read the letter of the law, there’s not a lot of wiggle room,” Schimmele said. “We’re trying to work with groups to help them fulfill the mission that they have and do the things they want to do. As a university, we’re in a position where we have to abide by the health standards”

However, Shaffer said that she hopes the University would work with her more directly so that Challah for Hunger can continue to sell homemade challah and carry-out its mission.

“It’s kind of incredible that a university that prides itself on student activism isn’t even trying to help Challah, because we did so well last semester and we had great hopes for this semester,” Shaffer said. “I wish that the University could put up a bit more of an effort to help us.”

Challah for Hunger isn’t the only student group affected by this policy. No student group will be able to have bake sales on Wash. U. premises—such sales are a common fundraising tool for many student groups on campus.

However, Schimmele said he hopes that the University can work with student groups to overcome any obstacles that may result from the restricted use of university kitchens.

“We will try to help where we can,” Schimmele said. “We realize it’s a tremendous change from what we’ve been able to do in the past, and I hope that as time goes on, we can work with student groups to support their mission and their intentions.”