When disposing of waste in the Danforth University Center, students have multiple recycling options, as well as a trash can. (Kim Jones | Student Life)

The Washington University Office of Undergraduate Admissions said it is making great strides toward a more sustainable way of operating, but many sustainability groups on campus question this claim.

Director of Admissions Julie Shimabukuro wrote in an e-mail to Student Life that the admissions office is continually finding “ways to ‘go green,’” in keeping with University-wide sustainability efforts.

According to Shimabukuro, sustainability initiatives include the replacement of a portion of paper mailings with electronic mailings. Shimabukuro said this effort is “expanding.”

The Danforth University Center is one of a growing number of LEED-certified buildings on campus. (Kim Jones | Student Life)

Other University officials praise the admissions office for its sustainability efforts.

“I have nothing but applause for the admissions office for moving in that direction,” said Matthew Malten, assistant vice chancellor for campus sustainability. “I think it’s tremendous.”

Some students, however, expressed criticism for the amount of mailings they received from the University prior to and after enrollment.

“I still remember how much we were flooded at my house by all of those [mailings]. It’s kind of ridiculous,” said junior Peter Murrey, president of Green Action. “I feel like I could have stuffed a pillow with all of them and slept very comfortably.”

Students involved in sustainability efforts on campus see a high potential for reductions in the admissions office’s number of mailings.

The toilets in the Danforth University Center promote water conservation by having two ways to flush. (Kim Jones | Student Life)

“They would just send you more and more things over and over and over again,” said senior Will Fischer, executive advisor for sustainability to Student Union President Jeff Nelson and leader of the Green Events Commission. “If you had applied or not applied, you would get a lot of really colorful, pretty brochures with Brookings on them. There is definitely a lot of room for improvement, I think, in that regard. I think that is why a lot of people have targeted that as something to start with in terms of ‘greening’ admissions.”

“We know that it would cost money to send all those pamphlets out,” Fischer said. “I think it’s maybe too bad that they waited until there was a lot of financial pressure to start [reducing mailings]. But I think, in general, that’s really good to see.”

Fischer and Murrey both encourage the admissions office to set quantitative targets for reductions in mailings.

“It would be cool if they could kind of publish some numbers or some facts about reducing paper usage by a certain number of pounds or saving a certain amount of money every year by e-mailing more than we are mailing,” Fischer said. “That would be effective.”

Admissions and the state of sustainability on campus

The University has made significant strides in recent years toward operating in a more sustainable manner. By introducing new building regulations, for example, the University has demonstrated a commitment to sustainability.

“We think we compare very favorably with many of our peers,” Malten said. “That being said, we know we still have a tremendous amount of work to do.” 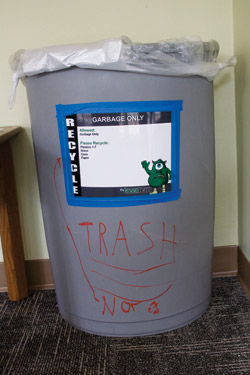 The university provides many recycling and trash cans throughout campus, such as this one in Lee. (Kim Jones | Student Life)

With the release of the Sustainability Plan—originally planned for release last spring but delayed until this October—Fischer and Murrey hope to see further improvements in the level of environmental sustainability efforts made by the University.

“I think the University as a whole is doing a really good job in terms of recognizing that we are in need of some improvement in a lot of areas,” Fischer said. “The problem with the University as a whole is that they’re not trying to set a new bar; they’re trying to just achieve the bar, whether you’re talking about admissions, transportation, dining, parking services.”

The admissions office, according to Murrey, is not keeping up with the standards set by other sectors of the University.

“From what I’ve seen, the admissions office is kind of behind the curve on adapting towards more sustainable technologies,” he said. “Buildings has done a pretty d— good job of it with the limited amount of funds that they’re working with. Really with admissions, it’s not a matter of switching over to a green technology or something like that—it’s a matter of reducing.”

Fischer made several suggestions for how the admissions office can go about doing this.

“They could offer carbon offsets to students who fly here to visit. That’s a very lofty goal. In terms of reasonable expectations for the admissions office, this is exactly what’s reasonable for them right now,” he said.

Although admissions is making efforts to engage in more sustainable practices, Murrey argues there is more that can be done.

“I would just encourage the admissions office to remember that there’s ‘reuse’ and ‘recycle,’ but there’s also ‘reduce.’ Reducing is something that not even just sustainability people like me care about,” Murrey said. “It’s a common concern when people come here.”