‘The Right Side of History’

Co-founded by senior David Dresner, The Right Side of History seeks equality for the LGBT community by engaging straight youth.

Senior David Dresner doesn’t want his children to have parents who are second-class citizens.

Over the next two years, Dresner hopes to jump-start a national movement by applying new strategies to gain equal rights for the LGBT community.

Dresner’s journey as a gay rights activist started just seven weeks ago when he was approached by Brian Elliot—the older brother of 2008 Washington University alum Marc Elliot—to join him in a project called “The Right Side of History.” 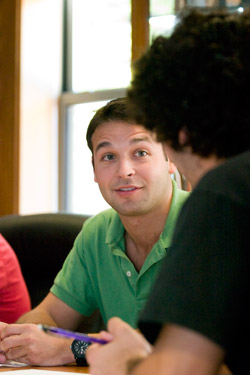 Senior David Dresner works with sophomore Michael Weiss in his mission, entitled “The Right Side of History,” which strives to launch the gay rights movement into the mainstream and eventually to pass legislation guaranteeing the LGBT community equal status. (Sam Guzik | Student Life)

Dresner and Elliot—both openly gay men—hope that The Right Side of History will reshape the status quo of the LGBT movement by using straight youth to garner mainstream interest and propel the movement into the national political sphere.

The Right Side of History’s 26-month goal is to pass legislation akin to the 1964 Civil Rights Act that would ultimately afford the LGBT community equal rights in the United States.

The idea to engage straight people in the struggle for gay rights came to Elliot after he read a Columbia University study conducted in every state. The study showed that at least 75 percent of each state supported equal legal rights—a figure much larger than Elliot had anticipated.

Despite this widespread support, however, 29 states do not have laws on record prohibiting employers from terminating employment based on sexual orientation. Additionally, 13,000 people have been discharged from the military in violation of “Don’t ask, don’t tell” for admitting their homosexuality.

“The second takeaway of the study was [that] the young folks overwhelmingly support the most controversial issues,” Elliot said. “Young people were the vanguards of the civil rights movement. This is their generation’s turn to hold our country to its own ideals. It’s not fine for laws to treat people differently.”

Dresner said it mathematically makes sense to place a large emphasis on targeting straight people since straight people make up between 90 and 95 percent of the population.

“My efforts right now really need to be focused on the larger 95 percent of the people, and if I’m going to really demonstrate and get the show of force that I’m looking for, I need to go for the harder demographic first,” Dresner said.

Dresner said he believed that gays in the United States would achieve equal rights within 30 years time. But when Elliot said he could fast-forward these results to the year 2011, Dresner knew he wanted to take part in this movement.

Every year since 1994, Congress has attempted to prohibit discrimination against employees on the basis of sexual identity and orientation as well as disability through the passage of the Employment Non-Discrimination Act. That bill has consistently failed to garner enough support to pass both houses of Congress.

If passed in its entirety, the proposed bill, The Civil Rights Act of 2011 with Religious Exemptions, would be more expansive than the Employment Non-Discrimination Act. The 2011 Civil Rights Act would prohibit job discrimination and afford LGBT Americans the same federal rights of citizenship that are afforded to heterosexual Americans.

The ‘Theory of Change’

Elliot and Dresner hope to tackle this ambitious goal by following the “Theory of Change”—a model developed by the movement that aims to empower youth and engage millions to make change and demand equality.

By doing so, Elliot and followers of the movement hope to pervade American culture and make the issue of gay rights a prominent one–one on the minds of national legislators.

“We’re hoping to engage millions of youth across the country,” Dresner said. “We’re trying to charge straight youth in an autonomous action.”

A professional group, dubbed “Creative Geniuses,” has been formed for The Right Side of History in New York and Washington, D.C. A leading executives from consulting firms are already on board and they said they have spoken with several strategists responsible for the Obama campaign’s success.

Dresner and Elliot are currently seeking to expand the group.

A band of brothers

Dresner is launching the campaign at Wash. U., and he found his first supporters in his fraternity house—Sigma Phi Epsilon (SigEp). His brothers have provided assistance to the movement at the University.

“At SigEp, there are a lot of people who want to get involved and help out,” said junior Lionel Johnnes, a member of SigEp. “The challenge will be branching out and stepping outside of the Wash. U. bubble and spreading to the majority of the population.”

While the support has already spread beyond SigEp on campus, Dresner said he hopes to use the fraternity as a platform from which to reach other college campuses.

With more than 13,000 current members, Sig. Ep. is the largest fraternity in the nation in terms of current members, and Dresner has plans to visit SigEp chapters through the country to garner support.

A group of approximately 25 Wash. U. students has been meeting each Saturday to discuss strategies for spreading the group’s message and expanding the movement.

Although Dresner said he has received overwhelming support for his campaign on campus, The Right Side of History’s tactic to primarily engage straight people represents a controversial stance within the gay rights movement.

In the past, the gay rights movement has traditionally been led by members of the LGBT community.

Junior Ayla Karamustafa, an advocate for LGBTQIA rights, said that while she respects Dresner and his team, she believes the movement disregards the history of the LGBT movement and excludes many people who have devoted their entire lives to the cause.

“Our movement centers on gaining rights for individuals of various sexual orientations and gender identities of all racial backgrounds; to take away those identities or to refuse—at the very least—to acknowledge them renders the entire thing senseless,” Karamustafa said.

Senior Laura Lane-Steele, president of Pride Alliance, said her group agrees with the intention and goals of the Right Side of History but will be working toward the goal of equality in different ways.

“Obviously everyone on Pride is going to have a different opinion on this movement and the issues surrounding it,” Lane-Steele said. “Pride and the Right Side of History have different strategies in achieving goals for LGBT people.”

Dresner said he expects challenges along the way but will continue to garner support until he gets the American youth on the right side of history.

“I think a lot of people at Wash. U. care about this issue,” Dresner said. “People can’t believe these types of inequities exist in this country. Wash. U. can be the start of a civil rights movement.”

With additional reporting by Kate Gaertner