Student Life reporter Cordelia Palitz sat down and spoke with Julie Otsuka, the Japanese-American author of “When the Emperor was Divine,” this year’s Freshman Reading Program. Otsuka was a speaker in this fall’s Assembly Series. Hailing from California, Otsuka is 47 years old and one generation removed from Japanese Americans who were interned in camps by the U.S. government from 1942 until 1945.

Student Life: How did “When The Emperor Was Divine” take shape? What inspired you to write this novel?
Julie Otsuka: The barebones outline of what happened in the book was almost exactly what happened to my family in the internment camps, but the personalities of the characters are totally invented. I started the book when I was at my second year in the MFA program at Columbia in creative writing. When I wrote the first chapter of “When the Emperor Was Divine,” it was the first piece of serious fiction I had ever written. I’ve been sitting on this stuff for a long time, but I think it was all deeply buried in my unconscious. I feel like the book kind of crept up on me unexpectedly.

SL: Have any other colleges used your book for a program similar to the Freshman Reading Program?
JO: Quite a few. For whatever reason, it’s a really busy fall. 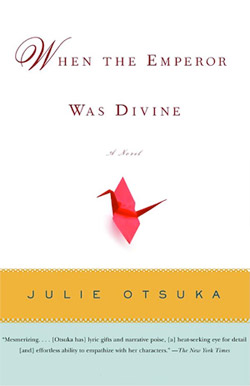 Julie Otsuka, author of "When the Emperor Was Divine," spoke Tuesday as part of the Assembly Series program.

SL: Why do you think colleges responded to your book this way?
JO: I actually finished writing it in June 2001, so I didn’t know it would reverberate the way it has post-9/11. All the racial profiling that’s going on and how Arabs and Muslims are being targeted and singled out for investigation and interrogation can be related to the Japanese internment. So I think that might have something to do with it. Also, not a lot of fiction has been written about this, and I think that now we’re ready to hear this story.

SL: What do you think about the current treatment of Arabs and Muslims?
JO: It’s worrisome. My grandfather was arrested by the FBI on December 8, 1941—the day after Pearl Harbor was bombed. He was classified as being a dangerous enemy alien, which I think is pretty similar to being called an enemy combatant today. You can just be arrested and have no legal rights at all. You have no trial by jury, and you could be detained indefinitely. I think that 9/11 brought up a lot of memories for older Japanese people who were interned in the camps, because there are so many parallels.

SL: Have you received any response from the Japanese-American community about “When the Emperor Was Divine”?
JO: Yes, and that’s what’s been so great! I went to Seattle because they chose the book for Seattle Reads, and there’s a large Japanese population there. It was so great to meet these older folks who had been in the camps. I remember I was giving a talk at a branch library in Seattle, and the moderator asked if there were any people there that had been in the camps. The first two rows of these old Japanese folks all stood up, and the rest of the audience began to applaud. It was terrifically humbling to meet the people that had gone through this experience.

SL: If nothing else, what is the one thing that you want your reader to get out of the book?
JO: Just to live with these characters, soak it in and be there with them. I want them to feel what the characters feel. I didn’t write this book with an angry screed, and I didn’t want it to be a moralizing book. I just wanted it to be a book about people and what they had gone through. I hope it’s an experience that the reader can enter.
SL: Changing gears a bit, how was college for you?
JO: It was great! I loved it. I went to Yale, and I had never been to the East Coast before. It felt like a very cultured world. I was an art major, and I was so happy. It is so cliché, but they are great years. Just take advantage of them. They are great times. It was often overwhelming with the pressure, but when I think back, I loved it. It took me a while to adjust, but you just have to stick it out.

SL: You wanted to be a painter, and I understand that you had some emotional difficulties during your transition to becoming a writer. How did you recover from that?
JO: I actually started reading. I always felt very free and unselfconscious when I was painting at Yale, but all of a sudden at graduate school, there were so many critics. I couldn’t perform under pressure. I dropped out and started word processing at night, but I was in despair. I felt like I had failed at the one thing I wanted to do. I started going to my neighborhood café and reading during the day. There’s something so great—especially when you’re feeling depressed—about reading, because you can get lost in somebody else’s story and forget about yourself for a little bit. I became interested in the world of the story. I was older, and my approach to my work was very different; I had already failed once, and I felt like I had nothing to lose with writing.

SL: What advice would you give to college students struggling with the struggle to find themselves and to meet others’ expectations?
JO: You’re not necessarily going to get it right the first time, and I think college is a time to explore and be brave. Don’t be afraid to fail. There’s nothing wrong with it. I know in this environment—just because of the pressure to do well—it’s hard, but it’s also a good time to learn and expand. I think finding the thing that you love to do is really important too. Find what your passion is, because if you’re going to do something in life, it might as well be something you like doing.

SL: Are you working on anything new right now?
JO: I’m finishing up my second novel right now.

SL: Anything you can tell us about it?
JO: Many Japanese women came to this country as picture or mail-order brides between 1908 and 1921. It was a very hard life, but they stayed and started families. I am writing about a group of women that came over as picture brides. In my research, I came across so many stories, and I wanted to weave them all in, so the entire book is in the “we” voice. There is no main character.

SL: What are your final pieces of advice to the average college student?
JO: Pay attention to what’s going on around you. Be kind. Talk to your neighbors and take the time to find out who they are. And read! You learn so much from reading. And have a good time!