The first victim of women’s soccer was Claremont-Mudd-Scripps. The Athenas kept the ball mostly on Wash. U.’s side in the first half. Thirteen minutes into the game, CMS’s Nicole Sady-Kennedy struck from the right side, sending the ball across from 20 yards out and ricocheted it off the far post into the goal.

In the 32nd minute the Bears received a free kick just outside the box, resulting in a scramble just in front of the goal line. After three close range shots, all denied by CMS’s goalkeeper, the ball clipped a Claremont defender and rolled inside. 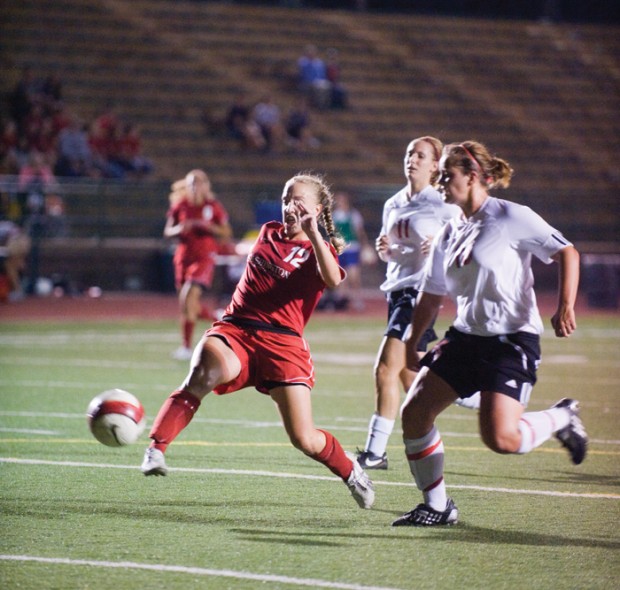 Both teams took eight shots, tying the game at 1-1. Frustration was evident on the Bears’ side, who had missed some key scoring opportunities.
Senior Caryn Rosoff scored quickly with an assist from sophomore Rachel Haas.

Rosoff distracted the goalie during her run as sophomore Natalie Callaghan’s first career goal off a free kick from 40 yards out slipped in to make the score 3-1.

The brief homestead gave the team their first home win. According to Coach Jim Conlon, the team’s objectives were to get a shutout and finish opportunities.

Just how much offense, however, nobody could have guessed as Wash. U. demolished Grinnell 10-0.

Rosoff delivered the first punch only four minutes into the game, receiving a pass from midfield and pounding the ball in from the 15 yard line. Six minutes later, Rosoff fed junior Julie Tembunkiart for a successful one-on-one with Grinnell’s goalkeeper.

“Since [Caryn] moved out to the outside wing, I continued my run to fill in where she had been so I was in a position for a cross I would’ve given to her,” Tembunkiart said.
A mere 42 seconds later, Haas found the back of the net off a cross by sophomore Lee Ann Felder. A scoring drought ensued for 20 minutes until Felder scored with 15 minutes left and Wash. U. took a 4-0 lead into the half.

Felder opened the scoring after two minutes with a left side rebound from graduate student Sam Murphy. Eight minutes later, Murphy took one for herself off a cross by sophomore Ashley Nault.

“I just happened to be in the right place at the right time, and I tucked it in the corner,” Murphy said.

With a 6-0 lead, things were just starting to heat up. Sophomore Emma Brown received Nault’s second assist of the night to add another to the rising score.

“We pointed out that the goalie didn’t have the greatest hands and so we knew we had to follow up on shots,” Brown said. “[There was a] shot and it came off her hands and I knew it was coming out and I was there.”

Brown complemented Clatch’s goal a little over a minute later, with a feed from Rosoff for a one-on-one with Grinnell’s goalkeeper for her second goal. With four minutes left to play, Brown completed her 18-minute hat trick with an assist from sophomore Michelle Peterson.“Once the team got into a rhythm, it was easier to go out there and just kind of have fun,” Brown said.

The last time Wash. U. scored in double digits was in 2004 against Blackburn, with the record being a 12-0 win in 1999 against Anderson.

Wash. U.’s defensive line allowed only four shots as freshman goalie Clara Jaques got her first shutout in the first half. Junior Katy Southworth and freshmen Caitlin Heim split the second half. “Hopefully it launches us for the rest of the season,” Jacques said.

The Red and Green prepare for Alma College and Calvin College next weekend. “It’s start from scratch,” Conlon said.