New class larger than most, has more foreign students

The Washington University Class of 2013 has more freshmen than classes in previous years, according to Director of Admissions Julie Shimabukuro.

“[The admissions officers are] saying it is one of the largest classes,” Shimabukuro said. “They are not exactly sure if it is the largest.”

The University admitted more than 1,500 students this year, she said, which is a significant increase over last year’s 1,430. 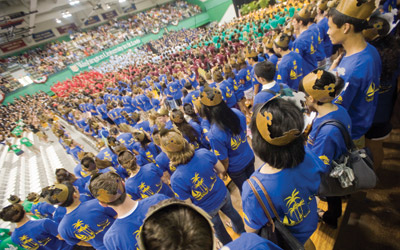 The Class of 2013, at 1,515 students, is one of the largest classes ever admitted to Washington University. The proportion of international students increased this year, an admissions official said. (Matt Mitgang | Student Life)

The decision to make the class larger than previous classes was intentional, Shimabukuro said.

The primary reason more students were admitted this year is that the newly opened Umrath House can house more students. Because each student living on campus requires a bed, the number of beds available in freshman living quarters limits the number of freshmen who can be admitted.

“With the new residence halls opening up on time, we were able to expand the class a little bit,” Shimabukuro said. “That’s the main challenge in admissions. It’s always tricky. You don’t want to go over what we can accommodate. This year, because we could accommodate those students, we did.”

The admissions office says it is pleased with the larger size of the incoming class but does not expect that future classes will be this large.

“For us, in admissions, it’s always nice to say ‘yes’ to a few more students. We really love that,” Shimabukuro said. “I think, for next year, we’re probably going to go back initially to probably around 1,400—plus or minus in that range. We’re not anticipating that it is going to be a larger class.”

Despite the larger size, the makeup of the class is not different from that of previous classes. The profile of the student population has remained consistent, and the academic quality has remained high, according to Shimabukuro.

The proportion of international students admitted, however, has increased from last year.

“This year we did have a larger international class come in. The Office of International Students and Scholars did a wonderful job of accommodating all those students,” she said. “It’s always nice to have more of a global campus and a global perspective.”

For many students, a larger class size is a plus.

“The campus is more multicultured,” freshman William Wang said about the increase in international students. “I think it’s good.”

“It’s nice [to be part of a large class], because there is more opportunity to meet new people and there’s a higher chance of finding people with similar interests,” freshman Carolyn Carpenter said.
Shimabukuro said she does not see any potential drawbacks to the larger class size.

“I don’t think there are drawbacks, as long as we can accommodate them in the classrooms—which we are—and in the residence halls,” she said.