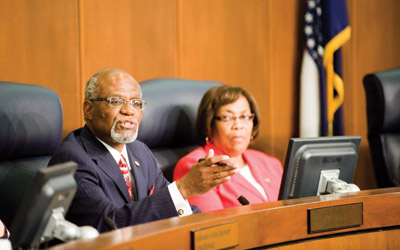 “If you had asked me two months ago if I thought the voters in St. Louis County would have this opportunity in November, I would have said no,” said Robert Blaine, medical public policy specialist at the University. “So I think it’s a significant step forward.”

The signature virtually assures the ban will go on the county ballot, meaning students registered to vote in Missouri who live west of the Brookings parking lot can vote on it. The bill’s sponsor, County Councilwoman Barbara Fraser, D-University City, has said the final step of getting a court order is all but a formality.

The measure would ban smoking in most indoor public places in St. Louis County. The ban would exempt bars—places where 75 percent of sales come from alcohol—casino floors and smoking lounges at Lambert-St. Louis International Airport. Areas west of the Brookings lot, including a major chunk of the Delmar Loop, would fall under the ban.

“I think the University would encourage any individual to educate themselves about this issue and make a decision on their own,” Blaine said.

The final bill was its third version, after weeks of heated debate, close votes and bill amendments.