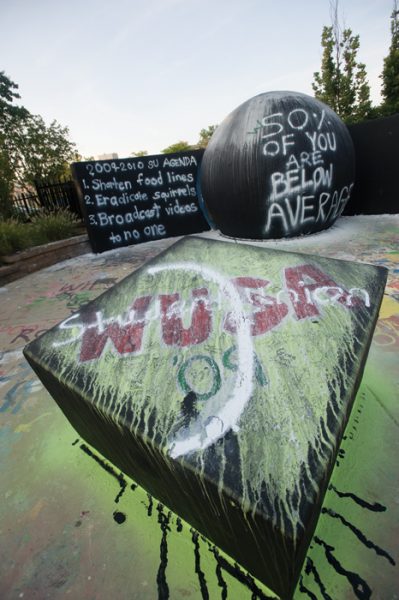 Unauthorized graffiti was found Wednesday on the sculpture near the Underpress. Police have not received any complaints. (Matt Mitgang | Student Life)

While peppy signs plastered throughout campus welcomed freshmen to Washington University, an unknown number of people greeted students with a message of their own on the first day of classes: “This today is gone tomorrow…Don’t screw it up.”

Students walking to class from the South 40 encountered a montage of unauthorized graffiti spray painted on the wall and large pyramid and ball facing the Underpass.

Despite the obvious joke at Student Union’s (SU) expense, SU President Jeff Nelson said in a statement to Student Life that he is not “particularly offended.”

“I’m not sure if the graffiti was done maliciously or meant to be humorous,” Nelson wrote in the e-mail. “Whether students agree with us or disagree with us, I just want them to dialogue about campus issues and give feedback in constructive ways.”

Nelson also said that the “graffiti artists” who painted the ball demonstrated their interest in the activities of SU, since they “have obviously read enough about our plans and have seen enough of our work to be able to satirize it in as much detail as they did.”

The graffiti remained until the early Wednesday evening when More Fools Than Wise, a student a cappella group, painted over it.

While the Underpass is open to various forms of student group advertisements, all paintings must be authorized beforehand through Student Affairs.

So far, no complaint has been filed with the Washington University Police Department.

Students passing by the Underpass on Wednesday could not help but notice the graffiti. Some enjoyed the message.

“I think it sends a message to people to have fun moreso than listen to SU. The people who did [must be] anarchists,” sophomore Logan Ice said.

Others, however, were more put off by the unexpected painting.

“I think that if someone has a message that they would like to convey to the community, they should do so through the appropriate channels,” sophomore Corey Donahue said.

For sophomore Meg Conley, the message was unwarranted.

“Showing such flagrant disrespect towards University policy while also fostering a negative vibe on freshman’s first day of class was an act of immaturity and stupidity,” Conley said.