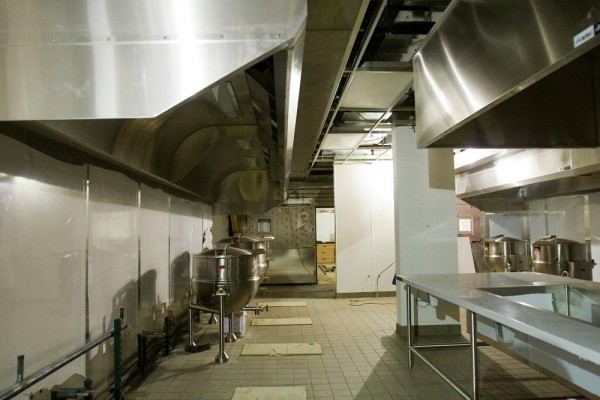 The kitchen inside the new Wohl Center will be able to serve more than 3,000 people. (Kat Zhao | Student Life)

As members of the Class of 2013 prepare to make Washington University their new home, Dining Services is scurrying to finish the new dining facilities on the South 40.

Amid student concerns, Bon Appétit insists the quality of the food options offered on the South 40 will not suffer from the transition.

The new Wohl Center will be built in two separate phases—the first of which will be finished before August move-in. The first phase will house both permanent and temporary dining facilities. A permanent dining facility will be completed with the second phase to replace the temporary one.

The new dining hall is set to offer many of the same options previously available at Bear’s Den, including a bakery, grill and sandwich station in the permanent section, along with a tacquería, salad bar, global station and a hot kosher station in the temporary facility.

A temporary Bear Mart also will be available for the 2009-2010 school year.

Ursa’s will be the only South 40 dining facility to remain unaffected by the changes.

“It is going to be one of the top food programs and living and learning concepts in the nation,” Nadeem Siddiqui, resident district manager for Bon Appétit, said of the new facilities.

The second permanent wing, which will open for the 2010-2011 school year, is set to house an Indian station and a Mongolian grill.

In 2010, the temporary facility will be replaced by offices and a kosher kitchen—the first of its kind on campus. Until this point, all kosher food items have been prepared at the nearby Hillel House and delivered to campus.

Vegetarian options will be broadened next year as well. The dining facilities will have a separate grill and fryer for vegetarian food. Plans are underway to have at least one vegetarian option available at each food station.

“I think that having the separate fryer is a good option. Seeing my food touch meat is a personal turn-off to me. That’s really good that they are trying to be more sensitive,” said junior Meghna Srinath, a vegetarian.

All of the food in the new dining hall will be served a la carte. Though there will be no replacement for Center Court, a brunch buffet will still be available on weekends.

“I think that what will be there in 2010 makes the transition worth it,” incoming freshman Tori Wesevich said.

Dining Services will be allowed to move into the new Wohl Center beginning on July 16, leaving workers a month to prepare the facilities in time for the projected mid-August opening.

“I think the milestones that have been set to make sure this will be handed over July 16 have all been met, so I am less nervous,” Siddiqui said. “We’ve just got to be flexible, just got to keep an open mind. We continue to tweak and we continue to adjust.”