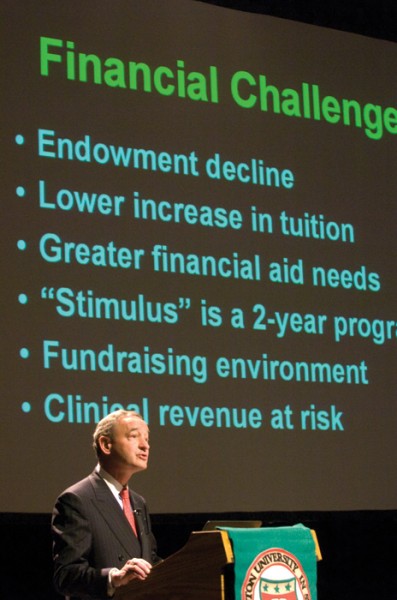 Chancellor Mark Wrighton speaks on the issues and challenges currently facing Washington University and those the school will face in the short-term future. The University’s endowment is estimated to have fallen 25 percent since the end of fiscal 2008 and is expected to continue declining. (Matt Mitgang | Student Life)

In the midst of the worldwide economic crisis, Washington University is dealing with a difficult financial situation of its own.

The administration estimates the University’s endowment is down by 20 to 25 percent as of the end of May, according to Chancellor Mark Wrighton.

“That [estimate] might be a little better than we had in mid-April, when I communicated it to the community,” Wrighton said in reference to an e-mail he sent to students, faculty and staff to inform them about the University’s financial situation.

He followed up that e-mail with a “State of the University Address” on April 23, providing the community an opportunity to ask questions.

“[It] might even be ahead [of] last year,” Wrighton said.

In fact, the total amount of money donated to the University in fiscal 2009 as of the end of May was 4 percent higher than the previous year, according to David Blasingame, executive vice chancellor for alumni and development programs.

“I think most places are experiencing downturns,” he said.

Blasingame attributed the University’s slight upturn to several large donations at the beginning of the year. The University, he said, also has benefited from an institution-wide strategic planning, which provides potential donors a glimpse into new ideas and plans underway at the University.

As one of the foremost responses to the economic crisis this past year, Wrighton said the University is re-prioritizing resources to increase financial aid. Bill Witbrodt, director of Student Financial Services, said the financial aid budget “has top priority.”

“We recognize that when the economy is rough, our families are having a tough time too. We need to do all that we can to make sure that our students can continue their education at Washington University,” Witbrodt said. “When things are tough, it’s even more important to have a stable financial aid budget.”

The student financial aid budget has increased by 20 percent in the past two years—a feat accomplished partially by cutting administrative expenses. Meanwhile, tuition has risen—though by less than 10 percent, Wrighton said.

This is the first time that University has had to freeze compensation expenses since Wrighton’s tenure as chancellor began in 1995, he said. The University has also filled advertised jobs slower and recruited fewer faculty this year than usual.

Wrighton predicts the next fiscal year, beginning July 1, 2010, will be even more challenging. In fact, the University—in efforts to brace itself for greater financial troubles ahead—has started preparing for next year much earlier than it has in the past.

Even with the chancellor’s recent disclosures about the University’s economic state, most students remain dissatisfied with the administration’s extent of communication and transparency in financial issues.

This past semester, several students came together to start a Facebook group called “WU Students for Endowment Transparency” (WUSET). Junior Jacob Stern, one of WUSET’s founders, said he and others formed the group after reaching a consensus that students have very limited access to the University’s financial information, such as the breakdown of the endowment.

“By adopting a method of controlled disclosure, the University would join the ranks of prestigious educational institutions, such as Brown, Harvard, Yale, Duke, Stanford, and Columbia that have empowered students by making investment records available but would not limit the power of trustees or administrators,” the group’s mission statement reads. “We feel this step would reflect an institutional commitment to student participation in the broader university community.”

WUSET is in the stages of preparing for more active efforts in the fall, including talks with the administration.

“We really hope that it can be a really cooperative relationship,” said Stern, who hopes that the partnership will be beneficial for both students and administrators alike. “We don’t see the administration as an enemy by any means.”