The white supremacist who killed a security guard as he fired shots in the Holocaust Museum in downtown Washington, D.C., Wednesday afternoon was a graduate of Washington University, officials from the University confirmed.

James W. von Brunn graduated from the University in 1943 with a journalism degree.

James von Brunn, 88, a resident of the Maryland eastern shore, entered the University in 1938 and received his bachelor’s degree in journalism in 1943.

During his time at the University, von Brunn was said to have been the president of the Sigma Alpha Epsilon fraternity and a varsity football player.

Administrators said the University has little information on the alumnus, and alumni relations has no record of contact with him in recent decades.

Shortly before 1 p.m. on Wednesday, von Brunn walked into the Holocaust Museum while carrying a “long gun” and immediately “opened fire on Special Police Officers (SPO’s) guarding the front entrance,” according to a D.C. Metropolitan Police Department press release.

Von Brunn is the author of an anti-Semitic Web site, holywesternempire.org, and the book “Kill the Best Gentiles.” 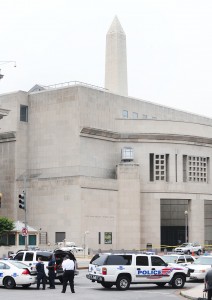 He was sentenced to 11 years in prison for a 1981 incident in which he entered the Federal Reserve Board headquarters with a sawed-off shotgun, claimed to have planted a bomb in the building and threatened to hold board members hostage. He served six and a half years of the sentence.

The University issued a statement after the shooting, expressing condolences and emphasizing its commitment to human rights.

“The University has a long-standing commitment to human rights and religious studies, including the Holocaust and Jewish studies,” the statement read. “The University is deeply saddened by this event and our hearts go out to the victims of this unwarranted attack.”

Museum officials said the museum will be closed Thursday and its flags lowered to half-staff in honor of Johns.