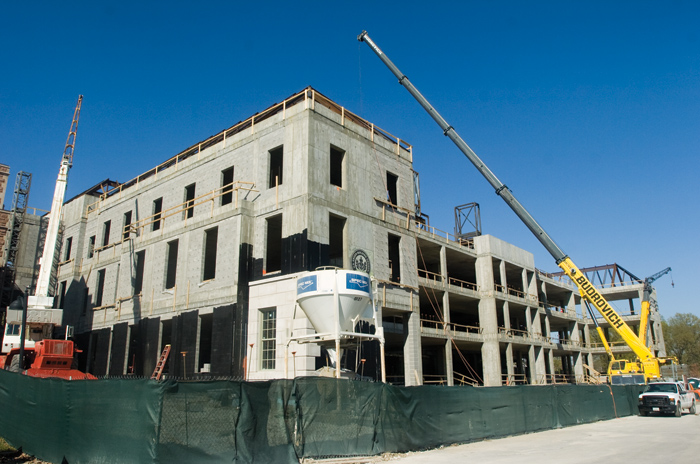 Stephen F. and Camilla T. Brauer Hall for the Washington University School of Engineering & Applied Science is scheduled to be officially open and ready for use in the fall of 2010, according to the administration.

Brauer Hall, located close to Whitaker Hall in the parking lot outside of Brookings Hall, is part of the University’s effort to improve research and learning facilities for students and faculty.

Construction began in October 2008 and will be completed in the spring of 2010 in preparation for the following fall semester’s academic use, according to Michael Altepeter, assistant dean of facilities planning and management.

Altepeter wrote in an e-mail to Student Life that Brauer Hall will feature the same architectural style as most of the buildings on the Danforth Campus.

“The architecture will be the collegiate gothic style used by Cope & Stewardson for the original buildings. The building is but one component of a master plan developed for this section of the University campus,” Altepeter wrote. “Brauer Hall is designed with an arcade inspired by the one at Ridgely Hall.”

Among the facilities in the building’s 150,000 square feet of space, there will be two teaching labs, one each for the Department of Biomedical Engineering (BME) and the Department for Energy, Environmental and Chemical engineering (EECE).

Altepeter notes that the building will be immensely useful to the development of the University’s already strong BME and EECE programs.

“The new building will offer the EECE Department state-of-the-art laboratories. The new building also gives BME, presently ranked 10th in the nation, the room it needs to expand,” he wrote.

A highlight of Brauer Hall will be its extensive research facilities for the two departments.

“The research laboratories will be state-of-the-art, modular facilities which will allow us to do research in Energy and Environment,” Pratim Biswas, chair of the EECE Department, wrote in an e-mail to Student Life. “They will be modern and faculty doing similar research will be grouped together. For example, research in aerosol science and technology, air quality and nanoparticle technology will be done on the third floor.”

Seven wet labs and a number of computational labs in Brauer Hall will provide students and faculty with additional facilities for research.

Another innovation in the new building will be a distance learning classroom, which will facilitate interactions between the University and other colleges in the McDonnell Academy Global Energy and Environmental Partnership. These include Fudan University in China, the University of Tokyo, the Indian Institute of Technology in Bombay and nearly two dozen others.

“[The distance learning classroom] will have the provision to connect to the world,” Biswas wrote.

In his speech at Brauer Hall’s groundbreaking ceremony in October, Biswas said he anticipated the building will be the site of research that will affect the planet.

“While a momentous event for our University, this building will impact the world,” he said during the speech. “We will train graduate and undergraduate students in energy, environmental and chemical engineering, and prepare the leaders of tomorrow to tackle the important issues we will face.”

In keeping with the University’s environmental and sustainability initiatives, Brauer Hall is designed to receive Leadership in Energy and Environment Design’s  Gold certification, according to Biswas. The building will implement many of the latest technologies to be as sustainable as possible, including a mechanism to capture and reuse storm water and a system of cooperating with local utility providers to reduce energy consumption.

To keep the University community up to date on the construction of Brauer Hall, the department has established a Web site with details on the project: http://eec.wustl.edu/about/newbuilding.asp.