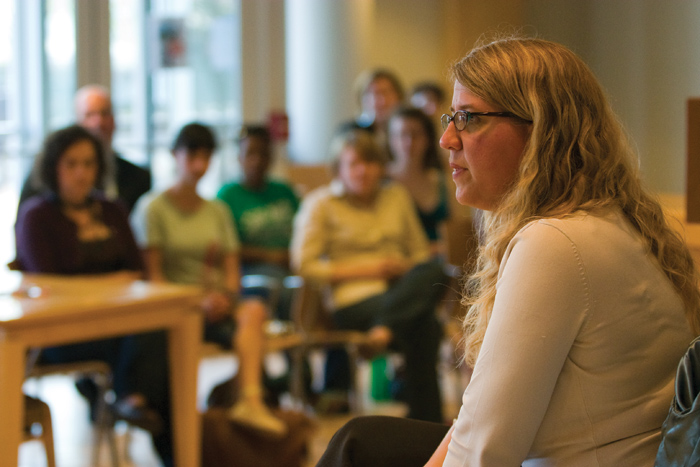 Marine, the former and founding director of Harvard’s Office of Sexual Assault Prevention and Response and the current and founding director of the Harvard College Women’s Center, spent Thursday consulting with the University’s Advisory Committee on Sexual Violence and Prevention (ACSVP). The ACSVP has been preparing to hire a director for a similar position and is currently deciding the goals, procedures and resources of the University’s own sexual assault prevention and response program.

The committee hopes to select a director by July 1, according to Jami Ake, co-chair of ACSVP and assistant dean in the College of Arts & Sciences.

Many at the University see the position as essential in coordinating among student groups, faculty and legal resources to ensure that victims of sexual assault receive the support and counsel they require, as well as in promoting a healthier and more understanding atmosphere on campus.

Some view Harvard’s office as a model program. In its first year, reported incidents of sexual assault skyrocketed from 4 to more than 200.

In its commitment to involve students in every step of the selection process of the University’s director, the ACSVP wanted to ensure that the session was open to the public. Ake and fellow ACSVP Co-chair Jill Stratton, assistant dean of students, stressed the need for transparency and student involvement.

“I get the sense lately that students have felt excluded from some of the decision-making that’s been happening,” Ake said. “I want the opposite to be true for this, and I don’t know a better way to do this than to say, ‘Here’s the best information that we’ve got going; ask [Marine] what we can’t think to ask her.’”

Marine addressed what the University as an institution can do to promote knowledge of and combat sexual violence, and emphasized the long-term benefit of studying how to help victims.

“Most people will know a person who is a survivor of violence. They may not know a person at Wash. U., but eventually they will. I think the institution can send messages of, ‘This is life knowledge that will be useful for you at a later time, even if you don’t think it is now,’” she said.

Marine said that while Washington University and Harvard are comparable—both are highly selective liberal arts universities with similar student bodies, similar institutional climes—the University, in her view, has a slightly more conducive environment for the kind of institutional change she would like to see happen.

“I actually see more people interested here in making sure that this gets up and runs successfully,” she said. “I certainly had a core group of supporters at Harvard, but I’ve never seen that many people at a talk [like there are today]. If that many people show up to hear the consultant talk I think, ‘Oh my gosh, how many people will show up to see the person you might hire?’”

Marine noted the enthusiasm she had seen among students at the meetings and then at the question-and-answer session.

“They could have said, ‘No, busy. It’s the day before the last day of class.’ These are just people who care. I think that’s a huge plus,” Marine said.

Marine said that one of the biggest problems in establishing a healthier environment is apathy or hostility among segments of the population—what she calls “virulent disinterest.”

“There’s always going to be a large subset of people who think this doesn’t apply to them, or they know a little bit about it and they’ve already made up their mind about it,” Marine said. “One of the biggest things this person can do is be willing to be an educator and work with that resistance, and that’s a very hard thing to do.”

As for how the hired director can combat such disinterest, Marine had specific advice.

“I think by being methodical about how she or he builds relationships here, in other words, figuring out where the strongest packets of resistance are, and developing relationships with people who can help you get into that realm, [the director can combat resistance],” she said. “It’s up to the person to be diligent and committed to building relationships.”

“The person should be creative. We don’t actually know everything we need to know to solve this problem yet. This person needs to remain open to learning new information and taking in new evidence that comes forward about how to address it,” Marine said. “The person has to be really interested in building relationships with people who are not invested yet. The third thing that’s essential is that the person is interested in taking some risks, maybe willing to go out on a limb and take some creative approaches and work with faculty.”

According to Marine, one thing that University students can do is think about the ways in which their own social environments do or do not condone sexual violence.

“Last time I checked, administrators and faculty are not the ones who set up parties. I think helping students to think about, ‘What are the ways in which my party may or may not be a safe environment for other people?’” she said. “Students can make a huge difference by paying attention to their environments and making changes that would make sexual violence less likely.”