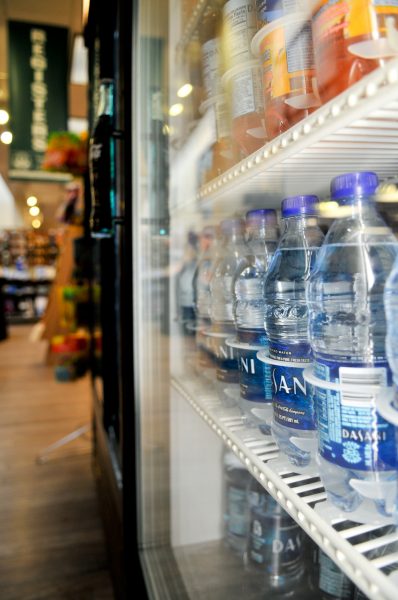 Wash. U. ceased selling bottled water this year, a move that has been picked up by colleges and universities around the country. (Evan Wiskup | Student LIfe)

Around the world, colleges and universities are taking notice of Washington University’s decision to ban the sale of bottled water on campus. The University’s decision is being cited as a precedent as other institutions of higher education look to make strides toward instating similar bans on their own campuses.

“I think it’s great,” said junior Kady McFadden, chair of the Student Union (SU) Academic Affairs Committee and the student behind the University’s ban. “Because we’re the first, we want to help facilitate other universities that are trying to go toward the same goal.”

To aid in this facilitation, McFadden will be one of several University members participating in a conference call about the ban next Friday.

The call will include participants from other universities and organizations interested in banning bottled water, as well as representatives from Dining Services and the University’s administration.

“We’ll be talking with anyone who’s interested in learning about how we did it, about all the technicalities that administrations would be interested in,” McFadden said.

One interested student who will participate in the call is Alexandra D’Urso, a third-year Ph.D. candidate in the College of Education at Pennsylvania State University.

D’Urso has been spearheading an effort to ban bottled water on Penn State’s University Park campus, which has an enrollment of about 43,000 students.

“When large schools like ours speak up, the country, and in some cases the world, listens,” D’Urso said. “The amount of impact we can have just by taking these seemingly small steps on our campuses can really have a large impact.”

In a letter to their university’s president, D’Urso and other members of environmental action groups at Penn State cited Washington University as an example of one institution that has successfully implemented the ban.

“Eliminating the sale or use of plastic water bottles is not without precedent,” the letter reads, before listing both the University’s ban and several city-level prohibitions.

D’Urso said that she envisions a bottled water ban spreading throughout the rest of the 24 campuses included in the Pennsylvania State University system, a change that would affect some 40,000 additional students.

“Ideally, we would have the whole Penn State system implement this ban. For now what we’re trying to focus on is the University Park campus.”

Other American schools that have begun moving toward bottled water bans include Brandeis University, which announced plans last May to begin implementing a ban, and Ohio Wesleyan University.

Additionally, students at Leeds University in the United Kingdom voted last December to ban bottled water on their campus, a decision that received extensive press coverage in the British newspaper The Guardian.

Citing Washington University as an example of an American university that had already implemented the ban, The Guardian wrote that Leeds’ ban is likely to be followed by many other U.K. schools.

“Bottled water companies must fear that the days of fooling people into paying handsomely for a product they could get for free are numbered,” said one article in The Guardian.

Other press coverage of Washington University’s ban has included a spotlight in Katie Couric’s online video blog “Notebook,” in which the CBS news reporter argues in defense of bottled water bans and cites the University as a primary example.

“More and more places are banning bottled water. Washington University in St. Louis will end almost all sales by the end of this semester,” Couric said.

Charles Huang, a researcher at a Washington, D.C. think tank on student action in environmental issues, says that he believes colleges like Washington University hold a unique position in leading environmental movements such as banning bottled water.

According to Huang, it is easier for universities to implement changes like bottled water bans, and these adjustments can have a cascade effect on surrounding communities.

One obstacle that students at other schools might face, however, could be that the tap water in the their local communities is not drinkable.

This problem was virtually a non-issue at the University, as St. Louis is consistently ranked among the top tap water cities in the nation.

“Ideally, those students would be working to pressure their cities to make the water cleaner,” McFadden said.