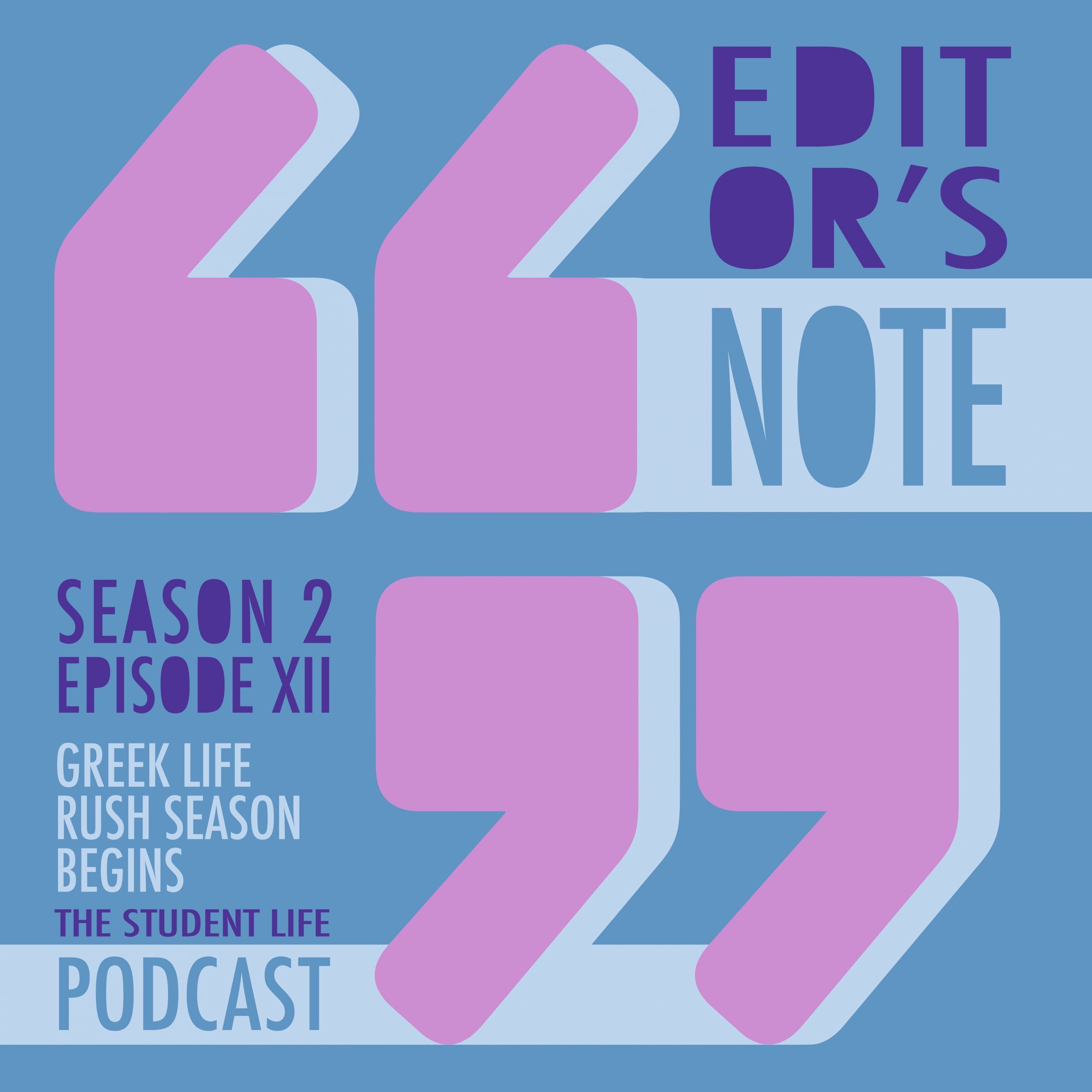 Spring rush is starting up this week, and the place of Greek Life on campus is the center of conversations once again. While leaders of Greek Life organizations have had to modify the rush process because of the omicron variant, criticisms of structural inequities within the Greek Life system have also led to reforms in this year’s spring rush. Listen to Senior Multimedia Editor Kamala Madireddi speak with Managing Editor senior Ted Moskal and Staff Reporter freshman Cynthia Chong about what spring rush will look like this year. Theme music by Jordan Coley.

Since the summer of 2020, there have been widespread calls for the abolition of Greek Life on WashU’s campus and beyond. Conversations about the exclusive nature of the organizations have led to over half of members deactivating and two organizations disbanding. Despite these deactivations and the growing movement for abolition, the Women’s Panhellenic Association (WPA) and Interfraternity Council (IFC) announced an almost two-fold increase in their interest form responses compared to last year’s rush numbers as of January 24th. Meanwhile, the Abolish Greek Life (AGL) movement and Student Union (SU) have continued to discourage first-year students from rushing.

I spoke with Managing Editor senior Ted Moskal and Staff Reporter freshman Cynthia Chong, who reported on Greek Life recruitment activities, about what spring rush will look like this year.

TED MOSKAL (1:52-2:37): Basically, the rush process, from what we’ve heard, is going to look a lot more virtual than it’s been in previous years. Big events, like PNM welcome event for potential new members, or a lot of the open houses are going to be just over Zoom. And so it’s just going to be a big Zoom call with a bunch of people. Smaller events going forward after that process are going to happen in person. Based on what the WPA President told us, 30 people is going to be the maximum number of people that are going to be gathered for a rush event, just given the circumstances. So that’s a cap they’ve established. So according to WashU guidelines, no food, no drink at these events. They’re going to be dry events; WPA officially posted about that. I don’t think IFC has said anything formally, but that’s according to WashU’s guidelines, which they’ve said they will adhere to.

KM (2:38-2:47): In addition to making changes to the rush process because of the University’s COVID guidelines, there have also been reforms in response to the AGL movement.

TM (2:48-3:16): In terms of rush, some of the different adaptations were going to be that all people now, for the big zoom calls, are gonna have to list their pronouns in their bio to make it more inclusive. There is going to be a form that PNMs will fill out after each day of rush to get feedback on how the process went in real time, as opposed to something that would just happen after the whole process is over and might be more disregarded. This will be something that WPA said they’re going to take more seriously.

KM (3:17-3:24): Outside of changes to the recruitment process specifically, there have also been general reforms to Greek Life organizations as a whole.

TM (3:25-3:56): One main part of the reforms they’ve been promoting is like awareness and programming of issues like anti-racism and sexual assault awareness and that type of thing. They have communicated that there is going to be more programming around those sorts of things to make members more aware and more conscious of all these different issues. And the second prong of that reform effort is some new scholarships and endowments to support students who might struggle to fit in with Greek Life.

KM (3:57-4:17): While these changes mark the process of Greek Life reform on the WashU campus, there have been concerns regarding how substantive the reforms really are. Moskal said that in an interview, WPA president sophomore Camilla Maionica broke down how Greek Life organizations plan to reinforce these reforms.

TM (4:18-4:51): Something she talked about a lot with the idea that they want to be held accountable for things they say. So having concrete plans for things that WPA is going to do in the future, like a lot of these reforms, we talked about, posting about them publicly online, and stating like we’re going to do X, Y, and Z so if X, Y and Z don’t get done, people will you know hold them accountable. That’s one plan for making sure things actually get done. And I guess the second part, as Camilla might say, would be making sure that this is something that gets passed down through generations.

CYNTHIA CHONG (4:52-5:23): Yeah, and adding on to what Ted said, Camilla also mentioned last night that there are going to be Standards chairs within each chapter that makes sure that the chapter is being held accountable for their DEI efforts and reforms. And then on top of that, they also have their Campus Life advisors, that they have to report to as well. And I think Camilla mentioned that she was in conversation with SU people, whom some of them are also part of the AGL movements, like she has been in conversation with those people.

KM (5:24-5:36): While Chong emphasized that leaders in Greek Life organizations say that these reforms will make the community a safer place, Moskal noted that members of the AGL movement disagree.

TM (5:37-6:03): Something I think people in Greek Life would argue is that there have been some substantive changes made, scholarships and endowment funds have tangible figures associated with them. AGL is obviously going to push back on that saying that you know these funds will not be enough, and it’s not really going to resolve some of the fundamental issues with Greek Life. That’s just kind of a discourse that’s going on right now.

KM (6:08-6:23): This discourse surrounding the impact, or lack thereof, of reform measures has dominated the AGL movement. In an episode of Editor’s Note from last spring, then Senior News Editor senior Em McPhie and Managing Editor senior Jayla Butler spoke about similar reforms.

EM MCPHIE (6:24-6:58): There have been some real reforms set into place. There have also been a lot of much more vague promises, a lot of Greek organizations putting out statements reaffirming their commitment to diversity, equity and inclusion, but I think that if you ask a lot of members of the abolition movement, they would tell you that there haven’t been very many concrete reforms to Greek Life as of yet, and a lot of the and perhaps all of the problems that were in place last semester, in terms of inequity and structural racism, et cetera, are still there.

JAYLA BUTLER (6:59-7:30): Yeah, and I would just add that, I think, to the outside viewer, it does look like there are a lot of reforms added to the sorority rush and recruitment process. But like Em said, a lot of those reforms don’t necessarily address the systemic racism, classism, homophobia within the chapters, and reforms of this level, they’re more cosmetic than addressing the actual issues that people have pointed out time and time again.

KM (7:31-8:22): While first-year students have been hearing about the reforms implemented in Greek Life organizations, they have also been learning about the harm perpetuated in the Greek Life system from the AGL movement and SU. On January 21st, first-year students received an email from Student Union’s executive council urging them to not rush this spring and an email from the WPA and IFC encouraging them to rush by stating the reforms that were put in place. Furthermore, the AGL movement organized a Zoom panel of former members of Greek Life about the harm perpetuated by Greek Life organizations on February 2nd. They have also provided resources about other ways students can find communities on campus. Moskal spoke about the AGL movement’s next steps.

TM (8:23-8:51): Membership sharply dropped during mostly the summer of 2020 as this conversation about racial justice and the role of Greek Life on campus was happening. Since then numbers have stayed relatively low, but there is a slow, gradual increase that we’re seeing in membership. For movements, like AGL and people who are opposed to having Greek Life on campus, this is a real opportunity to make sure that those numbers stay down, and they keep going down.

KM (8:58-9:16): Editor’s Note will be back next week to break down another developing story. Head to studlife.com to check out more of our recent coverage, like WUPD’s recent arrest for the Underpass vandalism and a profile on basketball player Justin Hardy. For Student Life Media, I’m Kamala Madireddi.