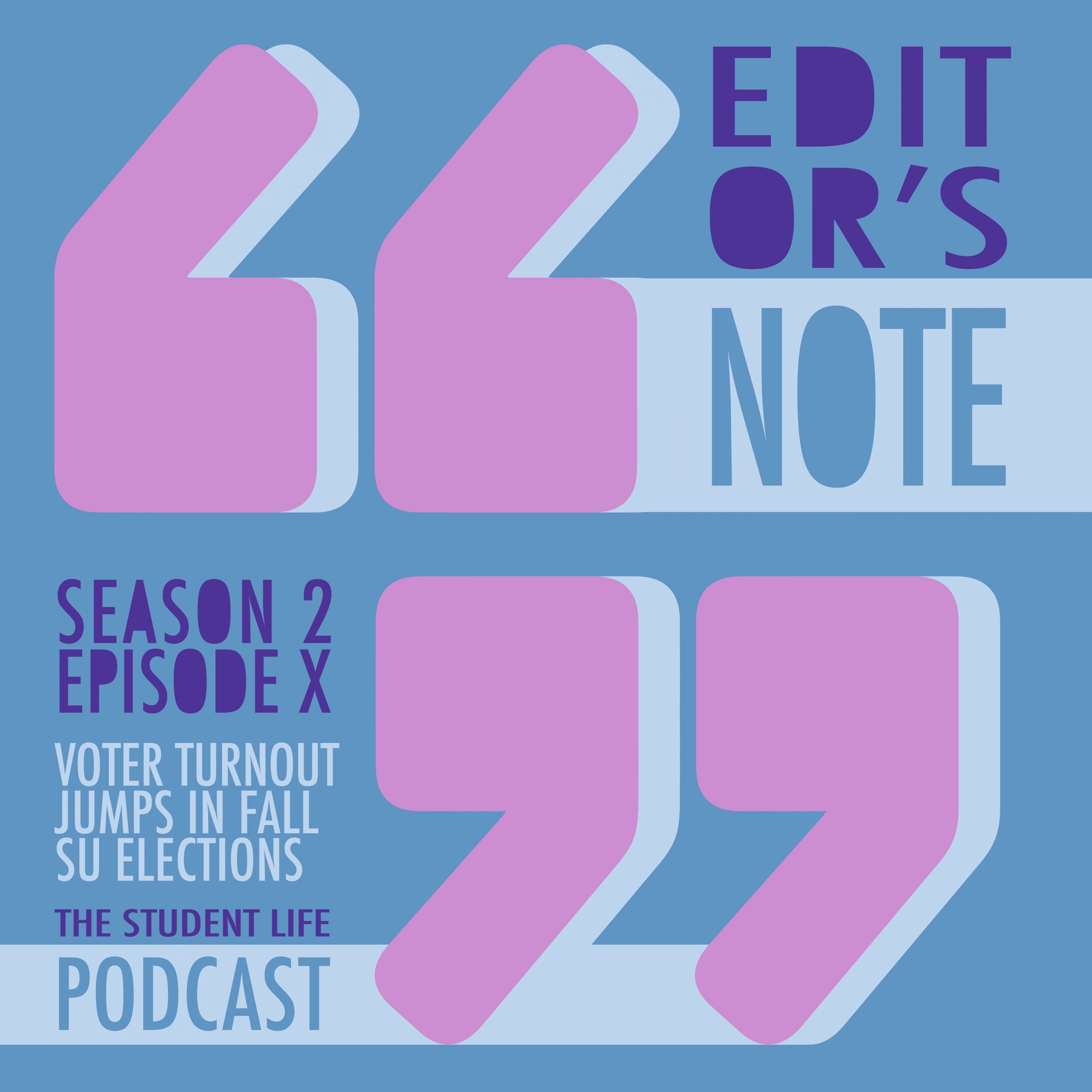 This year’s fall Student Union Election generated a lot of talk around campus, with a 34% voter turnout, a stark contrast to recent fall’s voter turnouts, which were between 15% and 25%. The jump in voter turnout came as a result of new measures implemented by SU, an unusually high number of candidates and a focus on the issue of Greek Life abolition. Staff Reporter Victoria Hirsh spoke with Managing Editor senior Ted Moskal to figure out why turnout jumped so much. Theme music by Senior Copy Editor JJ Coley.

VICTORIA HIRSH (0:09-1:12): The most recent fall Student Union Election generated a lot of talk around campus, with a 34% voter turnout, nine points higher than last year. This is a stark contrast to voter turnouts in recent years, which have hovered between 15% and 25%. So, what made this year so different? An unusually high number of candidates and high stakes as the issue of Greek Life abolition dominated the election.

I’m Victoria Hirsh, and you’re listening to Editor’s Note, Student Life’s weekly podcast breaking down our biggest stories with the reporters and editors that covered them.

This semester’s 34% voter turnout was similar to 2014, which had the highest engagement in the past eight years. Election engagement began to decrease after 2014 and fell to 14% in 2019.

I sat down with Managing Editor senior Ted Moskal, who reported on the past election. Moskal outlined the changes Student Union implemented in order to increase voter turnout.

TM (1:13-1:39): One step that was taken this semester was increasing the voting period from 24 hours to 96. So that expansion of the voting period was one big step to really give students more time to vote, give them a chance to actually have their voice heard and think about all the candidates. The voter guide was actually a really big initiative that took a lot of hours and just effort to create and really get everyone’s positions fleshed out. So people have a better idea of who they’re voting for.

VH (1:40-1:48): In addition to helping voters stay engaged with the elections, Moskal noted that the voter guide brings transparency into the process.

TM (1:49-2:09): The fact that people’s positions have been laid out in this public document, the voter guide and that when the next election rolls around, students and voters can look at this guide and say, “Hey, did my representative do what they said they would do? Did they fulfill these things on their platform?” And if so, that’s great, for that person. And if not, maybe that’s an incentive to start getting those things done.

VH (2:10-2:43): Forty-eight candidates ran in the recent fall elections, a large jump from last fall elections’ 30 candidates. With 22 students running for the eleven Treasury positions and 20 students running for the eleven Senate seats, the competition for positions led to candidates’ platforms mattering more than usual. This rise in competition follows discussion about the future of the place of Greek Life in campus life. While SU’s current platform calls for Greek Life abolition and the dehousing of fraternities, some candidates proposed that reforming Greek Life would be a better plan of action.

TM (2:44-3:26): So, Greek Life has been probably the most important issue in this SU Election this fall. SU leading up to this election has been very pro-abolition. They passed a resolution calling for the dehousing of fraternities on campus, I think about a year ago. And their current platform actually calls for the abolition of Greek Life. So Student Union is a very pro-abolition organization as of right now. But what happened this election is that a couple of candidates who were not as enthusiastic about this position had decided to run for it based on the idea that Student Union’s anti-Greek Life position is not really what the student body feels. And they were hoping to push for a Student Union that is more reflective of that.

VH (3:27-3:39): While SU’s platform on Greek Life has led to higher competition and voter turnout this year, Moskal noted that SU’s authority over Greek Life on campus is not as strong as many imagine it to be.

TM (3:40-4:16): So honestly, although there’s been like a whole lot of fuss about potentially pro Greek Life members being on SU, it’s not going to have, at least in my opinion, it’s not going to have a huge impact on the future of Greek Life at WashU. SU doesn’t have direct control over fraternities or sororities or how they’re administered. That’s up to Campus Life and [the] administration in general. SU can have important roles as an advocacy body. And I think that’s why anti-abolition candidates decide to target SU as an organization. They want to be a part of that push in their direction. But it’s not like it’s not a pivotal part of the role that Greek Life is gonna play.

VH (4:17-4:26): So Abolish Greek Life was pretty active last year, too. So why has the topic of Greek Life made this semester’s election more competitive than the previous semesters?

TM (4:27-4:53): I think there was just a lot going on last fall. There were a lot of other ways that these debates were being played out in other spheres. And right now, the debate over, you know, the abolition of Greek Life has kind of died down. And SU is one of the organizations that’s kind of continually been advocating for space equity and dehousing fraternities. And I think a lot of Greek Life people saw this as a way to continue advocating on their side and pushing back to those efforts.

VH (4:54-5:08): Abolish Greek Life WashU (AGL) endorsed six candidates and denounced candidates who they identified as members of Greek Life in an Instagram post shared November 18th, the first day of voting. Moskal noted the impact AGL’s endorsement had on the election.

TM (5:09-5:35): I think it did have an impact, because all six of the people who were endorsed ended up winning with pretty favorable margins. And the people who were not endorsed or denounced, I guess, would be the word, by them had sort of mixed results getting in. So I think that did have a very real impact. And that really shows the power that Abolish Greek Life still has on campus as an organization. Even though the movement itself has kind of been not as active this fall as it was last year.

VH (5:36-5:54): By the end of the election, five out of the 13 candidates who either identified with or expressed support for Greek Life were elected into the Senate and Treasury. As Ted said, the six candidates who were endorsed by Abolish Greek Life WashU were elected. These mixed results raise questions about the future of SU’s platform.

TM (5:55-6:26): Pro-abolition members of SU are still in the majority. And I don’t necessarily think that it’s going to change parts of SU’s platform regarding Greek Life in a meaningful way. But I think what’s going to happen is the debates surrounding Greek Life in SU are going to get a lot more heated and a lot more interesting, just because… there are significant numbers of people from both sides in SU. So I think that’s going to be really interesting to watch play out, even if it doesn’t necessarily mean that SU is going to become a pro-Greek Life organization.

VH (6:34-6:51): Editor’s Note will be back next semester to break down developing stories in the spring. Head to studlife.com to check out more of our recent coverage, like the fate of next spring’s study abroad programs, a look into campus consumerism and changes to WUPD’s off-campus presence. For Student Life Media, I’m Victoria Hirsh.