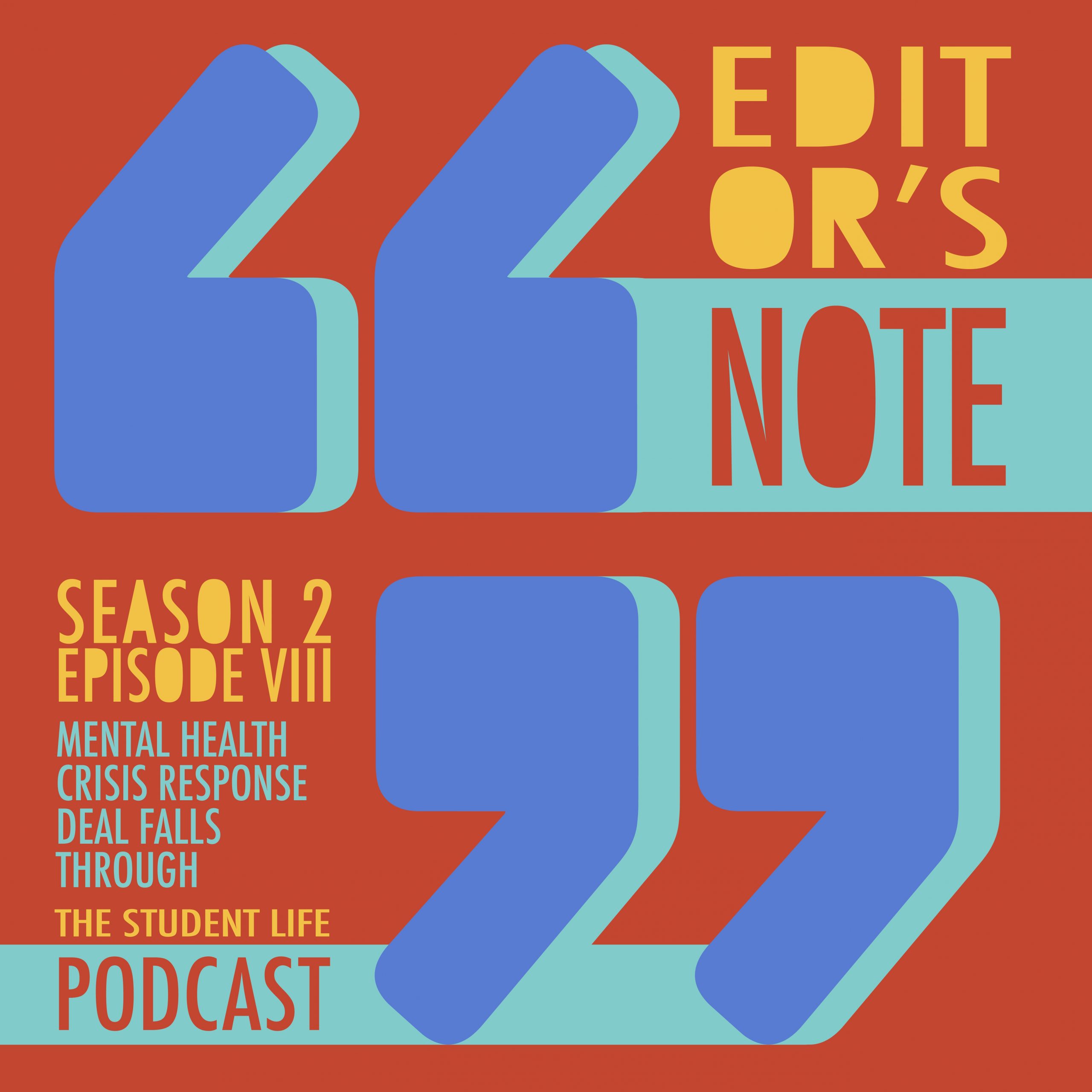 Back in March, the University’s Public Safety Committee called for licensed mental health professionals to respond to mental health crises instead of WUPD officers. And, while the University announced in May that they’d implement this recommendation, a recent Student Life investigation found that the future of this initiative is uncertain. Senior Multimedia Editor Kamala Madireddi spoke with news editor sophomore Syndey Crump about the investigation. Script by Senior Multimedia Editor Jaden Satenstein. Theme music by Copy Chief JJ Coley.

You can also listen to this week’s episode of Editor’s Note on Spotify or Apple Music and you can read Sydney’s reporting here.

KAMALA MADIREDDI: Washington University students have been fighting for a change in the role of the campus police department, WUPD, for years. That movement significantly grew last year in response to the murder of George Floyd and the formation of the student group WashU Students for Abolition. One major criticism of campus policing is the use of WUPD officers to respond to mental health crises. The department receives an average of two mental health crisis calls per month, and students have expressed feeling uncomfortable or unsafe with WUPD’s presence in these situations.

Back in March, the University’s Public Safety Committee released a report calling for licensed mental health professionals to respond to mental health crises rather than WUPD officers. And, while the University announced in May that they’d implement this recommendation, a recent Student Life investigation found that the future of this initiative is uncertain.

In an interview with Executive Vice Chancellor for Administration and Chief Administrative Officer Shantay Bolton earlier this month, news editor sophomore Sydney Crump learned that those plans from May to shift mental health responses away from police had fallen through. I talked to Crump about the details of this failed deal.

SYDNEY CRUMP: The Public Safety Committee came out with some recommendations, one of which was to reimagine WUPD’s response to mental health crises on campus. And to implement that they wanted to partner with BHR, which is Behavioral Health Response, and that’s a local nonprofit in the community, and their main focus is just responding to mental health calls. They have a crisis hotline, and the plan was to implement a crisis hotline specifically for WashU students.

KM: Crump described Bolton’s explanation for why this deal fell through.

SC: It wasn’t mutually beneficial for WashU or BHR, and so they kind of walked away. Both parties walked away from the negotiations, the agreement. And so that’s kind of what happened. We don’t really know the details of why they walked away from the agreement, but that is what we know, and since the deal fell through WashU has decided to look internally and find resources for students on the campus rather than with an outside provider.

KM: But what those internal resources will look like is still unknown. Now, 14 months after the creation of the Public Safety Committee, the University will form another group to address that question. Bolton told Crump that she plans to organize an advisory task force of students, faculty and staff by the end of the fall semester.

SC: She wants to really get their voices and input, so we don’t really know what that looks like yet. So when we say internally, I think there’s still a lot of details to work out there…. (4:00) And so I think her goal is to have that task force put together and then start working on what it looks like to implement the public safety recommendations internally on the WashU campus.

KM: So like you mentioned students being a part of this. How aware are students of this change, and what is the University doing to make students more aware?

SC: So the interesting thing is the University never publicly said that the BHR deal fell through. They never made the announcement to say, ‘You know, we had a deal with BHR, and it fell through.’ And they have not announced an alternative, so I honestly think that this StudLife article may be the first time some students are even hearing that: number one, the BHR deal fell through, and number two, that there’s an advisory task force, so I think a lot of this information will be new to students.

HANK WEBBER: We’ve already started to figure out exactly how to respond and how to implement. The timing here is that over the next two to three weeks we’ll develop an implementation plan that will be affected clearly by responses to the report and we will then start implementation. And I would hope that we can implement all of these by next fall at the latest.

KM: While the implementation of the mental health crisis response recommendation is no longer certain, Crump noted that WUPD has made some changes to improve transparency.

SC: One of the changes that has already been implemented is adding vehicle stop data and pedestrian stop data to their website. And that’s the main thing that they’ve done so far. Dr. Bolton talked about working with WUPD to come up with some more ways they can be transparent and continue to just provide students with what exactly they’re doing every day…But how they do that is still to be determined.

KM: Yeah, so it sounds like a lot of this is TBD at the moment.

SC: Yes, a lot of it is TBD, and one thing that Dr. Bolton emphasized was the fact that a lot starts after she creates this advisory task force at the end of the semester, so I think she wants to hear from students first before she makes any major changes.

KM: Yeah, and then to wrap things up, throughout your reporting on the piece, was there anything that surprised you?

SC: It was really surprising to like get into interviews and see that, like, ‘Oh wait, they’re actually not doing any of these things that they said they’d do in June,’ so I think it was just surprising to see that things weren’t lining up and how different things are going to look, so I think that was the most surprising thing.

KM: Editor’s Note will be back next week to break down another developing story. Head to studlife.com to check out more of our recent coverage, like updates on spring WILD, WashU soccer teams’ playoff journeys and controversy surrounding this year’s Diwali skit. For Student Life Media, I’m Kamala Madireddi.

Editor’s Note season 2 episode 6: The arts are back on campus