Editor’s Note season 2 episode 6: The arts are back on campus 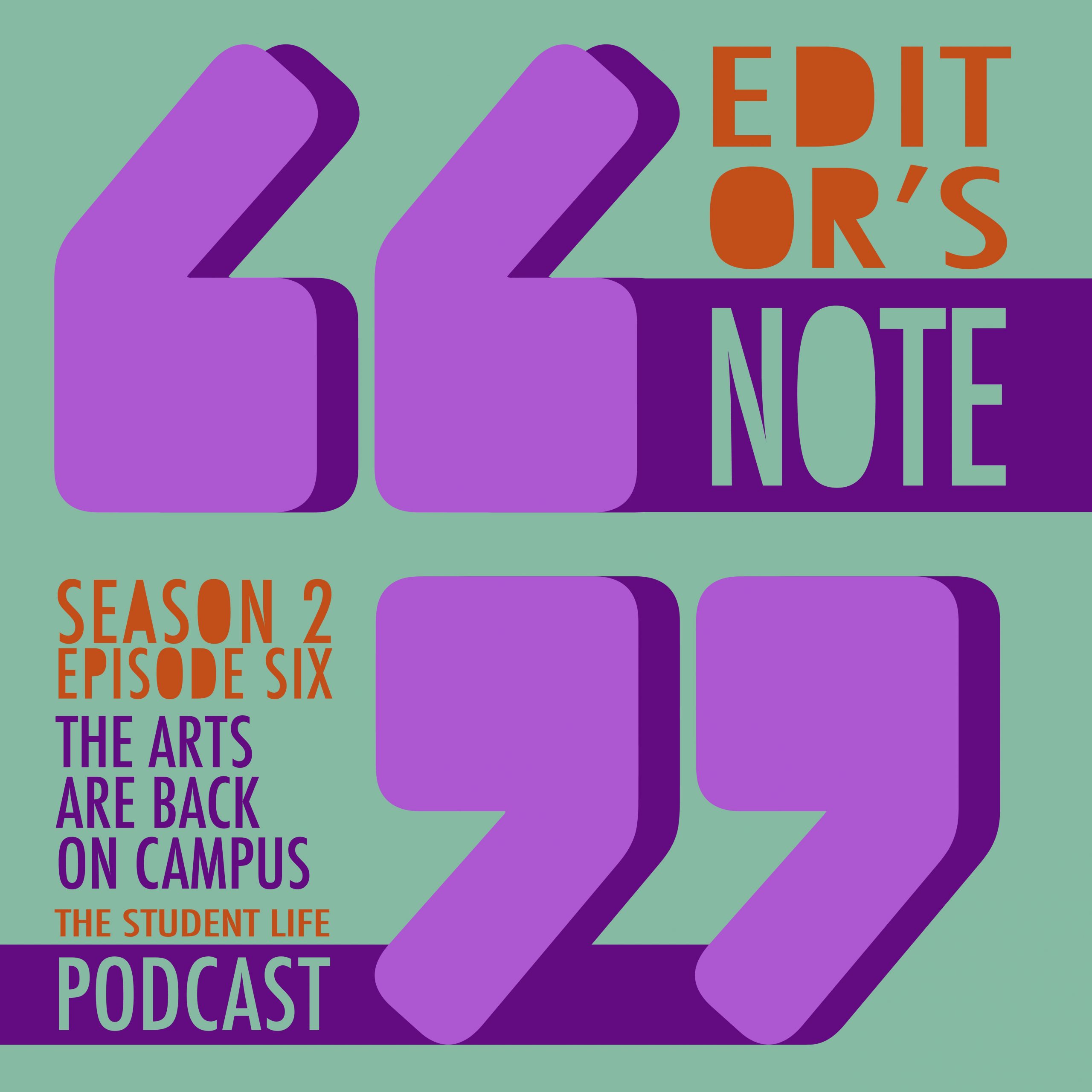 Students are back on campus, and the University’s arts and entertainment groups are in full swing. The stark contrast of last year’s all virtual performances to this year’s in-person shows is being reported by the Student Life arts and entertainment section, Cadenza. Staff reporter junior Leah Ford spoke with Senior Cadenza Editor senior Jordan Coley and Managing Editor senior Isabella Neubauer, about their experiences covering the return of live performances and the exciting productions premiering on campus.

LEAH FORD (0:08-1:19): With Washington University students back on campus, student groups are gathering again in person and the University’s arts and entertainment groups are in full swing. The in-person shows put on in the past couple of weeks, like the Performing Arts Department’s first major show of the semester, ‘She Kills Monsters,’ and The Stereotypes a cappella show, are a stark contrast to the virtual performances that dominated the arts scene last year.

I’m Leah Ford, and you’re listening to Editor’s Note, Student Life’s weekly podcast breaking down our biggest stories with the reporters and editors that covered them.

Throughout the changes that the pandemic has brought, the Student Life arts and entertainment section, Cadenza, has adapted the way they’ve reported on the campus arts scene.

I spoke to Senior Cadenza Editor senior Jordan Coley and Managing Editor senior Isabella Neubauer, about their experiences covering the return of live performances and the exciting productions premiering on campus.

Coley recalled how the pandemic changed the reporting process.

JORDAN COLEY (1:20-1:57): During COVID, I definitely think that there were less WashU centered pieces because a big thing we do is the a capella concerts. And there were 13 acapella groups and none of them performed last year so we couldn’t cover that. And then as far as theater and everything, the PAD still had a show, and BA, Carnaval, and AST still did shows, and we covered them, but it obviously felt super different because it was online and so much about theater experience is seeing shows live. It was weird that it was all virtual and it felt very not real.

ISABELLA NEUBAUER (1:58-1:2:24): Yeah, I think a lot of our coverage last year was us being like, “Yeah this was on Zoom, but it was still good” or like, “How is this department making it work on Zoom?” And it was a lot of stuff like that, and now I think we’re all finally, just like, “Oh my God we’re back!” Like yesterday, I went to see “She Kills Monsters” and I was sitting in the Edison. And I was like “I haven’t been in here for like a year and a half, but I’m back.”

LF (2:25-2:29): Coley is also thrilled to sit in the audience again and enjoy live performances.

JC (2:30-3:00): I really like student theater shows, and I saw them last year, but it was online, and so I’m excited. I just reviewed one, and I’m going to go see the Cast N’ Crew show, so I’m excited to just be back in the Village, in the Black Box and experiencing live theater again and being able to cover it. It’s really cool when we get to profile student artists on campus because these are people who we go to school with and have class with. And it’s super interesting to see the type of art they’re doing, like how they balance out with classes and everything.

IN (3:01-3:59): Yeah, same for me. It’s kind of an editor’s nightmare in the sense that we are going to have a lot of content that we have to have because every show is happening in the next couple of weeks. But, I don’t know, just as somebody that really enjoys theater on campus it’s pretty great, we are back and everyone is doing something to show that. This is so cheesy but I feel like I’m always surprised when I go to see a theater show. I write a lot for Cadenza — I’ve written many, many articles even since I stopped being a Cadenza editor this last April — but I feel like theater, and especially student theater, isn’t really something that you can predict. Like you go into a show and it’s never going to be the same show. If I went and watched “She Kills Monsters” this weekend, it wouldn’t be the same that I saw yesterday, I feel like I’m always surprised.

LF (4:00-4:10): While the transition back to in-person productions has been a welcome change, both Neubauer and Coley emphasized that reporting on shows over Zoom had its advantages.

IN (4:11-4:41): Working during the pandemic actually helped me a lot. Because, this is just like a personal thing, but I had really bad anxiety about doing interviews before the pandemic. Then being able to do them on Zoom was actually super helpful in making me a lot more comfortable with doing interviews. I don’t know how it was generally for people, but for me it felt very comfortable to sit down in the office with Zoom and just talk to people.

JC (4:42-5:12): I think it definitely depends on the person, but it’s also very nice that you have that opportunity because, last year, obviously everyone had this, but the Zoom fatigue was like “Oh, my goodness, I don’t want to be on Zoom ever again,” but now that we have a good amount of things in person, it’s way easier to be like, “Hey, I only have 20 minutes, but if I do this on Zoom like that cuts out a ton of travel time.” So I like that we can have the flexibility to choose which one.

IN (5:13-5:24): Yeah, that said, an in-person interview is always better but, at least for me, just because I’m super busy this semester, it hasn’t been something I’ve actually been able to do.

JC (5:25-5:44): And now that we’re back in person I definitely think it’s better than being online. But we were inside for a year and a half and so just being around people and being outside again, and even that, even though it’s enjoyable, it’s draining. So I feel like in different ways they both kind of change how people have time and want to interview and stuff.

L (5:45-6:10): Just in the next month, campus performance spaces will be full of students enjoying dance, theatre, music and cultural shows. Stay tuned as Student Life covers those productions and the students behind them.

And, as always, Editor’s Note will be back next week to break down another developing story. For Student Life Media, I’m Leah Ford.

Email [email protected] to get involved with our growing podcast team!

Editor’s Note Episode 3: The fight over the future of Greek Life