Missouri legislators are considering Senate Bill 66, an initiative that would penalize activists, potentially including Washington University students, for engaging in many of the actions that uphold their movements. In this week’s episode, freshman Charlotte Kramon talked with Senior News Editor freshman Orli Sheffey about the bill and how it would affect Wash. U. students. Senior Multimedia Editor freshman Kamala Madireddi edited the audio. Copy Chief junior JJ Coley wrote the theme music. 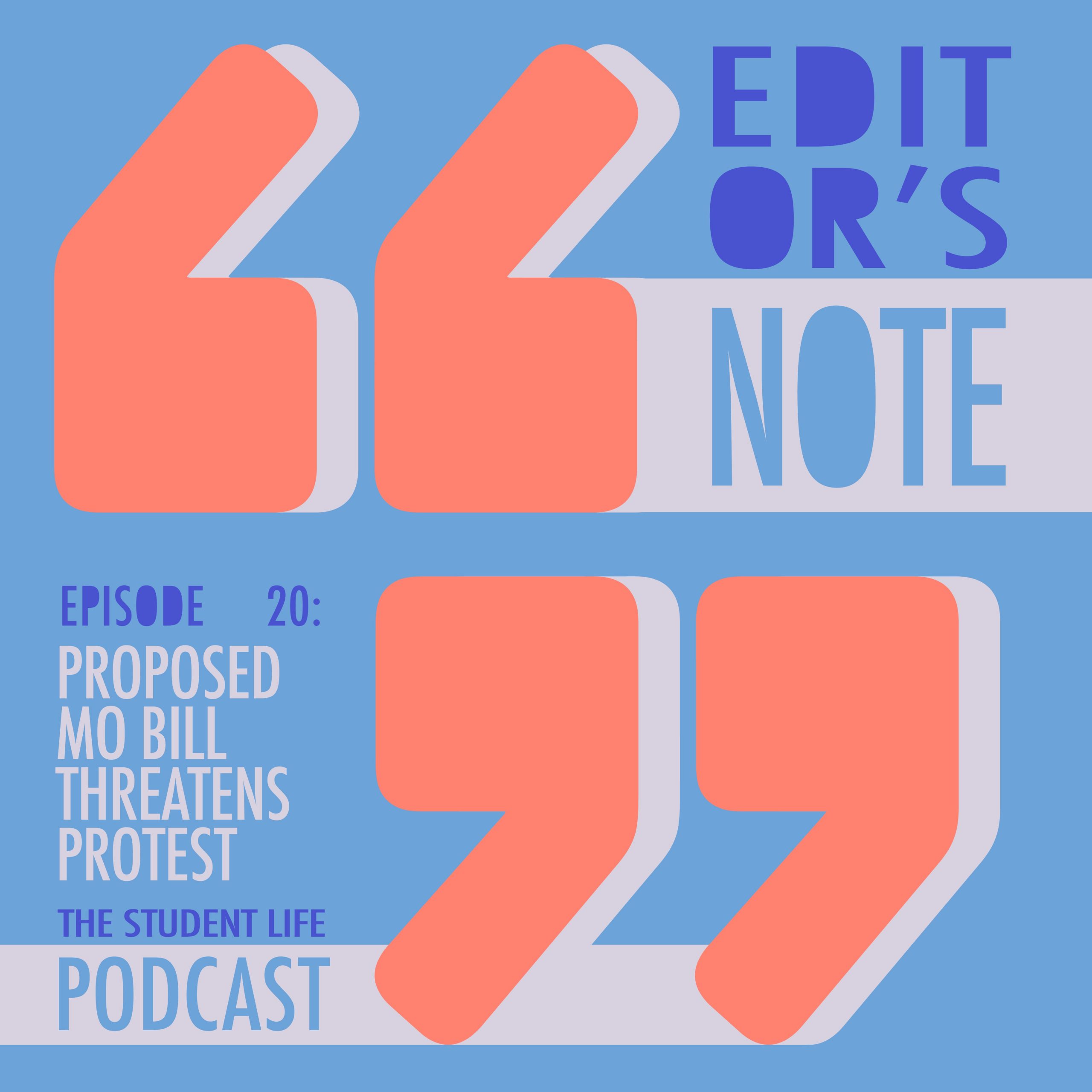 CHARLOTTE KRAMON (0:09 – 1:18): Throughout this past year, Washington University students have taken to the streets to exercise their First Amendment right to protest. However, a bill proposed in the Missouri legislature could drastically change how they do that.

Missouri legislators are considering Senate Bill 66, an initiative that would penalize activists for engaging in many of the actions that uphold their movements. Proposed by Republican State Senator Rick Brattin, the bill made headlines earlier this year for giving immunity to people who run over protesters with their vehicles. While the latest version of the bill no longer includes that provision, it could still have major impacts on future protests.

I spoke with senior news editor freshman Orli Sheffey about SB 66 and how it would affect Wash. U. students. Sheffey first explained what the bill entails.

ORLI SHEFFEY (1:19 – 1:45): If a single person goes in the middle of an intersection and blocks traffic, they could be charged with a misdemeanor. If a group of people blocked traffic, specifically, more than seven people, then they could be charged with a felony… Another provision is that SB 66 prevents municipalities from decreasing their law enforcement budgets by more than 12% relative to the other proposed budgets in their department.

CK (1:46 – 2:05): School of Law Professor John Inazu, who specializes in First Amendment law, told Sheffey that law enforcement provisions are not always clear as is. Currently, Missouri law describes unlawful assemblies as groups of seven or more people who agree to break the law through force or violence.

JOHN INAZU (2:06 – 2:46): Out of the Ferguson protests, there were federal court proceedings where federal judges asked questions on how law enforcement was enforcing the unlawful assembly provisions, and they were not able to answer under oath what those provisions are. They spoke generally of the First Amendment and of rights… If you’re the law enforcement official observing a protest, at what point do you determine that seven people have made an agreement? It’s got to be something more than just a sense of the crowd, right? So you have to have some evidence of an agreement, and you can’t bypass that requirement to declare an assembly unlawful.

OS (2:53 – 3:10): I think student activists are generally concerned about their constitutional rights to protest, whether that be Wash. U. for Abolition, the group that supports the abolition of WUPD or the Wash. U. Graduate and Undergraduate Workers Union.

CK (3:11 – 3:24): Kelsey Wulfkuhle, the social media chair for the union, also known as WUGWU, told Sheffey that she believes the University does not always prioritize students’ rights to engage in protest.

KELSEY WULFKUHLE (3:25 – 3:49): Wash. U. hasn’t really supported student’s ability to assemble-or not necessarily ability to assemble because that’s a constitutional thing-but supported students’ actions in the past. I’m thinking, so WUGWU had Martinville, where we camped out on the Chancellor’s lawn. We had students that were arrested, like WUGWU members who were arrested after that, or during that action.

KW (3:55 – 4:15): Frankly, this bill is in direct response to Black Lives Matter protests, defund/abolish the police protests, and in that they’re kind of like putting in a safeguard against if we were to defund the police… making it literally impossible to do so in the state of Missouri.

CK (4:16 – 4:28): Sheffey noted that president of College Republicans junior Matias Mayesh defended aspects of the bill, saying that some actions should require penalties.

OS (4:29 – 4:59): He talked a lot about how sometimes people are just going about their day. They need to get to work. They need to go to school, they’re driving their kids. And it is not fair to them, according to the president of College Republicans, for a protester to block traffic and to disturb society. So he said that it is important that police officers have specific rules about how to penalize people for engaging in this kind of activity.

CK (5:00 – 5:07): While the bill specifically applies to public police departments, student activists could still be arrested by WUPD.

OS (5:08 – 5:50) Yeah, so although public university police departments are explicitly mentioned, private or not, and WUPD is a private university police department, however, student protesters could still be impacted. So depending on whether you’re talking about a felony or misdemeanor, if a student engages in unlawful assembly on Wash. U.’s campus, assuming that this bill passes and in full, then that student could be arrested and charged under SB 66, either by WUPD acting under their own authority, or in jurisdiction with another Police Department that’s nearby.

CK (5:51 – 6:08): On October 27th, Abolish WUPD student activists blocked the intersection of Forsyth Boulevard and Wallace Drive for five minutes. Under SB 66, those students could have been arrested and charged, leaving a permanent stain on their records

OS (6:09 – 6:44): I think it could possibly deter students from coming out to protest. Students do have a lot on the line. Some of them are on scholarship. Some of them are in athletics, they’re in residential life housing, and it could hurt them for the rest of their lives if they are either sanctioned by the University if they get a misdemeanor or a felony. You know, this will go on their record when they’re applying for housing, when they’re applying for jobs. So it definitely would have an impact on students’ protest activity and whether they feel comfortable breaking certain rules.

CK (6:45 – 7:05): The bill passed the Judiciary and Civil and Criminal Jurisprudence Committee on Feb. 1 and is currently stalled in Missouri’s Republican-controlled legislature. Editor’s Note will be back next week to break down another developing story. For Student Life Media, I’m Charlotte Kramon.