If you missed Chancellor Martin’s State of the University address this week, listen to our reporters break down the main takeaways. This episode was edited by Kamala Madireddi and hosted by Charlotte Kramon. Our music is by Copy Chief JJ Coley.

Editor’s Note Episode 13: “State of the University” can also be found on Spotify, Apple Podcasts and Soundcloud. 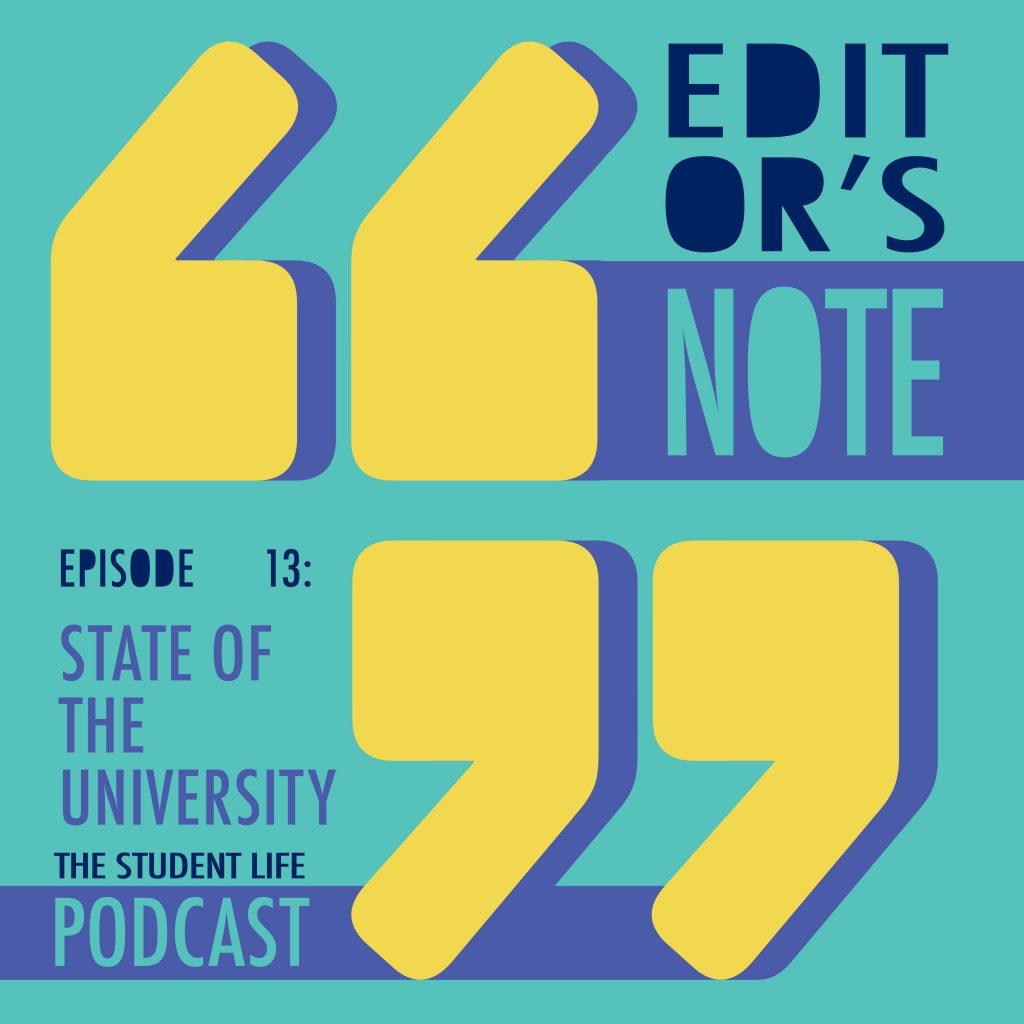 The transcript of the episode can be found below. It has been lightly edited for clarity:

CHANCELLOR MARTIN’S SPEECH (0:09-0:30) Greetings, and thank you for joining me as I outline the state of Washington University in St. Louis over the course of this past year. This is something you can expect me to do annually. While I’ve been planning to give this address for a year now, I certainly could have never predicted we’d be here, in this moment, living under these circumstances.

CHARLOTTE KRAMON (0:31-1:38) That was Chancellor Martin. On Tuesday, February 16, Martin gave his first annual State of the University address, a virtual event themed “Keeping the Momentum.” His 30-minute speech covered four main topics: “Academic distinction,” “Expanding educational access,” “In, With, and For St. Louis” and “Financial and Operational Updates.”

In the days after the speech, Student Life published news coverage of the event by freshman Ani Kesanapally followed by an opinion piece in response to the address by freshman Clara Richards. For those who didn’t tune in, I talked to Richards and Kesanapally about their main takeaways from Martin’s speech. Kesanapally first noted the optimistic tone Martin took when describing the difficulties the Washington University community has faced in recent months.

ANI KESANAPALLY (1:39-1:53) The main takeaway was the past year was very unique, very rough for Washington University. The outlook isn’t exactly a negative, in fact, in many ways, the way Martin portrayed, it was a positive.

CLARA RICHARDS (1:57-2:29) The main theme was gathering momentum. I mean, he obviously was trying to be optimistic, you know, be hopeful about the future and lift up what the University had done. To me, I write about this a bit, but I just would have appreciated a little bit more realism in terms of the things that the students have advocated for, and the things that… just the mental health struggles that a lot of people have gone through this year, especially on Zoom.

AM (2:30-2:41) Given the way we have adjusted, rebounded and grown in the last year alone, it gives me immense confidence that we can do anything as long as we do it together.

CK (2:42-2:47) Richards also noted that she was surprised by Martin’s comments about the recent tuition increase.

AM (2:48-3:08) Several weeks ago, I was able to share that we will be awarding significant merit raises this year, three months earlier than we usually do. We are doing this all while holding undergraduate tuition at the lowest increase in 60 years and projecting more than $150 million in financial aid spending this fiscal year.

CR (3:09-3:26) At this point, it’s almost humorous to stipulate the lowest increase, granted how much people are struggling, especially when he contextualized it with talking about reduced tuition fees, reduced parking costs, stuff like that.

CK (3:27-4:08) Despite having to make sweeping budget cuts, reduce salaries and furlough employees, Chancellor Martin shared reassuring financial projections for both the medical school and Danforth Campus in 2021. Martin also brought four guest speakers to highlight racial justice initiatives including faculty task forces and committees, hiring more staff of color, and expanding research. Also, CRE2, the Center for the Study of Race, Ethnicity, and Equity formed in October. In reaction to these initiatives, many student activists have criticized the administration for responding to injustice with committees rather than student-oriented action.

CK (4:10-4:16) I’m curious what you both learned from the speech versus what you felt like you already knew.

CR (4:17-4:41) Yeah, for me, I was definitely surprised with the admission information. It was a record number of applications. And I reported on that a little bit, but, I mean, obviously there’s been a lot of  obstacles with virtual tours and going test optional. So it just has been interesting that admissions are up so much in such a strange year.

AK (4:42-5:09) One thing that did surprise me outside of, I guess, looking into admission standards, would really probably be in terms of research revenue. I’ve been really, like, at least amazed. It’s not really the Danforth Campus, but with the [School of Medicine], just how they’ve been performing. I knew that they were doing exceptional because of how much they mean for the community and the region and the work they’re doing. But still to put numbers to it. I think, like $25 million or something in revenue, going strong, all that stuff.

AM (5:31-5:47) We also showed distinction in our response to the pandemic at the school level. Perhaps the most obvious has been our School of Medicine’s ongoing work on COVID-19 vaccine research and therapeutic treatments, in addition to launching our rapid saliva test, which is now being widely used.

CK (5:48-5:53) Still, I wondered how this information was geared toward a student audience.

CR (5:54-6:26) I really saw it as addressed to like, not the student body, addressed to the external community, whether that was potential students, faculty, parents. Yeah, just in the way that it really promoted the accomplishments without taking into check what the student body and faculty and staff have gone through in terms of adapting to these super strange circumstances.

CK (6:27-6:33) Even with this critique, Richards and Kesanapally both said they saw value in continuing this annual tradition.

AK: (6:35-6:51) I do want to add, though, I like the premise of having something like this. I don’t know how effective it was this year, but just having some sort of communication over what’s going on in the past year helps you as a student to understand, okay, what is going on in the community, right?

CR (6:52-7:20) I feel like if he addressed just the systemic issues that administration has kind of repeatedly ignored, that would make it a lot more important and a lot more watchable versus kind of just glossing over those. And, yeah, just having it be an ad…I wouldn’t say it’s necessarily just an advertisement, but just having it just try to promote the University.

CK (7:21-7:31) To view Martin’s full address, head to the University YouTube page. Editor’s Note will be back next week to break down another developing story. For Student Life Media, I’m Charlotte Kramon.