Is the Internet really that great? 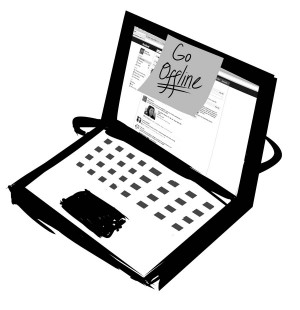 The Internet is great (really, really great), and it contains what might as well be an infinite supply of news and entertainment. Social media makes us feel like our preschool friends aren’t completely gone from our lives. Review aggregators tell us which movies to watch. The presence of newspapers online means that we can be privy to every trivial world development hours or minutes after it happens.

I interned for the government last summer, and while I was initially given large amounts of theoretically important work, in the last couple of weeks, my assignments dried up. On a good day, I’d be asked to set up a conference room or take inventory. More often than not, once I finished delivering papers in the morning, I’d be done for the day. In response to my requests for work, my bosses would tell me to sit tight.

Fortunately, I had been equipped with a laptop, and I was able to whittle away the hours parked on Facebook and reddit. This was all well and good at work, but I did the same thing at home. When I took classes over the summer, when I wasn’t out or in class, I was doing exactly the same thing, though the lack of a supervisor meant Hulu was also thrown in to mix it up.

I had, I realize now, lost the ability to entertain myself not plugged into something, and had the quaint idea of reading not been given to me as an alternative to the internet, I might not have recovered it.

I don’t think I’m alone in this. Earlier in the summer, a few friends of mine conveyed a similar message, lamenting how they could no longer read a book for hours on end and look up to find it was dark out. A lot of us, it seems, fill up our downtime with mindless, intellect-dulling entertainment.

We don’t have to. I made the conscious decision to cut the Internet—with the exception of occasional checking of email, Facebook and news—out of my life three weeks ago. The first day, I read “The Sun Also Rises.” In the next few days, I read the complete short stories of Ernest Hemingway. I would be surprised if my total daily time online exceeds half an hour.

I’m amazed at how much fuller my life feels. When I’m alone in my free time, I’m not reading Internet comics or having empty IM conversations with people I don’t care enough about to see in person. I’m reading. I’m expanding my mind. There’s a reason my vocabulary is the size it is today, and it’s not because I spent my afternoons as a child giggling at pictures of cats.

I’m not saying that everyone should give up the Internet for books; that’s just one of the many options available. Take a walk (the weather’s beautiful, but not for long), learn an instrument, knit, do just about anything else, and you’ll have put your time to better use.

There’s so much to be done and experienced in the world, but it will all pass you by if you, like I used to, spend hours every day staring at the dim glow of your computer monitor.