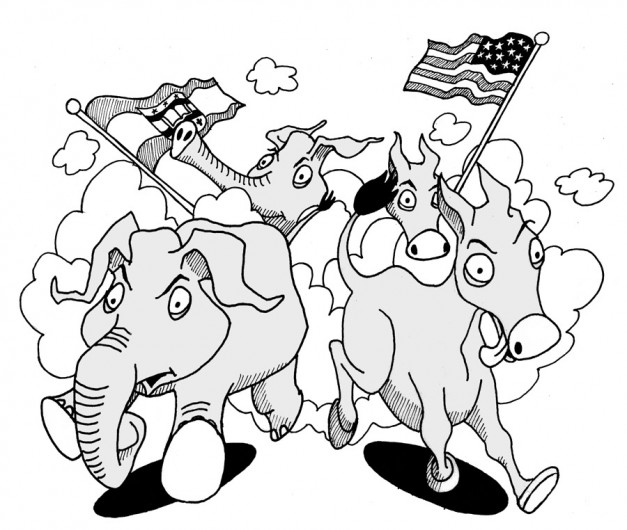 Sitting in my common room a few days ago, a floormate and I were having an intense discussion on the current political scene. The upcoming midterm elections, the Bush tax cuts and Don’t Ask Don’t Tell were all subjects of discussion and the conversation got fairly intense. It was a liberal versus a conservative in an intellectual battle for the ages.

It was at this point that a third person living on my floor decided to enter the discussion by asking, “Wait…what are the Bush tax cuts?”

This isn’t the only situation I could describe in which Wash. U. students are not up to date on the political scene. Fully half of the people I have interacted with in the last week had zero idea that Don’t Ask Don’t Tell was up for repeal.

Granted, as a freshman, it is entirely possible that the people I interact with just haven’t become involved in the political scene yet, but I believe my experiences represent something more symptomatic of our generation.

The country knows those of us who are currently under 25 as apathetic and disinterested, and we live up to that expectation. The only time our age group has actually come out in force to vote was in 2008, when we helped elect President Obama. It was believed that we had entered a new age in politics, when the expectations were that the young would be involved in subsequent elections. Yet, even with the midterms on the way (arguably more important than the 2008 election), many young people have lost the inspiration that brought them out to the polls two years ago.

That is not to say that Wash. U. doesn’t have politically involved students. The College Democrats, Republicans and Libertarians all help campaign for candidates, and the Washington University Political Review (WUPR) publishes issues twice a semester. But WUPR, through what would appear to be no fault of its own, goes unread in stacks (you can still find copies of this month’s issue everywhere on campus), and the WUPR/Student Life debate on President Obama’s policies last Tuesday night only had about 60 people in attendance, most of whom were on the staff of either WUPR or Student Life.

There are so many groups on campus that have the potential to take a political stance. Green Action should be campaigning like crazy, if only to make sure someone who denies the existence of climate change doesn’t get elected. Students for Choice should be phone-banking or sending out fliers to guarantee that the next representative for them in Congress supports a woman’s right to choose. Conservative groups should be out there trying to convince people that cutting taxes is the best way to reinvigorate the economy, or at least to elect a representative who won’t pass another stimulus.

Even if they don’t get things done, student groups should be involved in the political scene of their issues. It isn’t enough to just talk about what you want to do; you actually have to go out and try to do it in a way that seriously promotes change. Groups can have noble causes to fight for, but in this country, change really only comes through the ballot.

Our campus should be up to date on every single controversy, and we should have people screaming at each other over every single issue that we find important.

Maybe this lack of political involvement would be acceptable on any other campus. Perhaps I would be more accepting of this level of discourse if I went to Cornell or the University of Michigan. But one of the reasons I decided to come to Wash. U. is because this is supposed to be a political campus.

Every four years our school hosts the people who are just a step away from the presidency of the United States (or in 2008, a step and a heartbeat) so they can debate the issues important to the country. We are not supposed to be just another campus in terms of politics; we are supposed to be more involved, more engaged, more invested. We should be the standard-bearers of political discourse on a college campus if only so that we can live up to the expectations of our generation.