My time as a Tea Partier 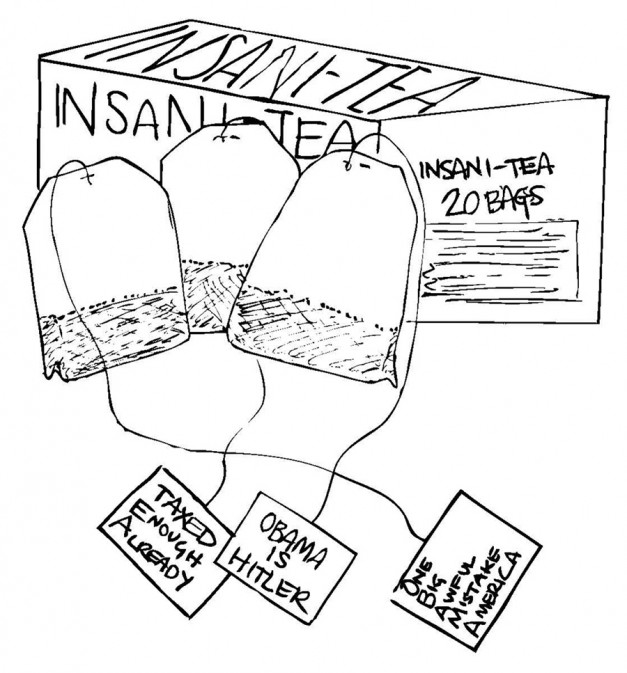 We have all heard about the Tea Party, haven’t we? This odd group is sweeping across the nation and throwing incumbents out of office left and right. (Political puns are fun.) But there is only so much you can legitimately gather about a political group from the newspaper and whatever humorous antics Jon Stewart has created about them. For this reason, on Sept. 12, I attended a Tea Party rally under the Gateway Arch.

There were a variety of speakers and a few musical guests. (Shout out to the band “Founding Fathers” for playing a few of my favorites while I was there. I will, however, not forgive changing the lyrics to suit your political views.)

For those not in the know, the Tea Party’s message favors free market capitalism, smaller government, fewer taxes and lower spending. What makes them the wacky uncle of political action groups are their less widely held beliefs, like the one that our president is a Muslim or that he hates America. (While on the subject of less widely held beliefs…according to one speaker, the “death panels” have already started. The speaker was a freakin’ medical professional by the way. I’ll let that sink in.)

However, they have proven remarkably effective at working within the system for getting their candidates on the ballot and winning in primaries across the country, something for which they should be respected.

The first thing I gathered about the Tea Party based on the event was the extreme sense of superiority they have in their beliefs. Just about every speaker who took the stage told the crowd that we were true patriots for fighting against government tyranny and that they were too smart to be taken in by sleek politicians with their sound bytes that distract us from the real issues.

The second thing I gathered was that their analysis of the current state of the country is straight up wrong. There were some comments about the secular liberal superminority (Dick Morris, that isn’t a word) that is controlling the country and the political narrative, something I find hard to believe considering how few members of congress are non-religious (there are only three) and how the narrative is not even a little bit controlled by liberals.

Of course this statement included the media as a whole, which apparently had been treating the Tea Party as a fringe group according to those at the rally. (Of course this means that FOX News doesn’t count as the media, something I can get behind.)

The last thing I gathered was the anger at education that the crowd seemed to hold. One speaker offered a story about how he hadn’t paid attention in economics class because he thought it was stupid, and that was why he had never learned about Keynesianism (people cheered at that).

And it wasn’t David Limbaugh foaming at the mouth about spending or those absolutely awful jokes about President Obama (seriously guys, a joke isn’t funny just because it’s something derogatory about the president) that got the most intense and angry reactions from the crowd. That moment came when one speaker appeared onstage and started ranting and raving about how college students were ruining America with their activism and liberal ideals and needed to be stopped.

I might be wrong about the intentions of his speech, especially considering there were both college students and college grads there, but I have honestly never been more afraid in my entire life than during that speech. All the people around me were visibly seething with anger. The sheer hatred with which they struck at an entire group, that I am a part of, for zero ideological reasons shook me to my bones.

And that is the problem with the Tea Party, not the ideological beliefs they hold and not the fact that they might end up being the winners of the 2010 elections. I might not like those thoughts, but I can accept them.

What I find unacceptable is the fact that I felt as though they were attacking me as a person for wanting to get a good college education.

The NAACP had a similar feeling when Tea Party members hurled racial epithets at Congressman Jim Clyburn before the final healthcare vote, culminating in their accusation that the Tea Party was racist.

Whether intentional or not, the personal fear and hatred they create is there. Our political process is neither easy nor clean. It is about compromise, debate and comparing ideals. Most of all, it is about respect.

But when you tell me that I am less than you for pursuing something that I have wanted since I was a child, that you hate me, and that I am to be derided for trying to grasp at my dreams; when you tell me that you don’t respect all the hard work I have done and mock me for my personal abilities, then I tell you I will do absolutely everything in my power to stop you from winning your election because you do not deserve it.