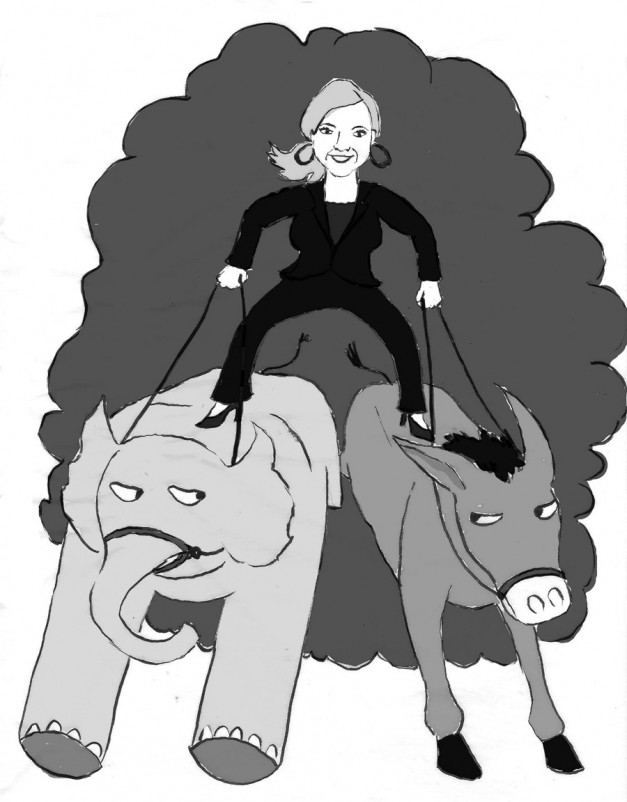 Maybe it’s the eight years I spent living in Arizona, but sometimes, in the midst of a heat wave such as this, I envision this scene:

It’s high noon in the Wild West. Two figures stand silhouetted against the endless desert sky as the buzzards start to circle overhead. Meghan stops a tumbleweed dead in its tracks with a well-timed jab of a sharpened stiletto. John narrows his baby blues and straightens his U.S. Navy baseball cap as they both slowly raise their NRA-sanctioned weapons. “Sorry Dad,” she shrugs, as she tosses aside her glimmering blonde locks, “but there’s only room for one McCain in this party.” (… At which point the whole improbable familicide complex comes into play, but you catch my drift.)

For those dear readers who are unfamiliar, Meghan McCain, daughter of former Republican presidential hopeful John, has emerged as a maverick of her own crafting. As a Generation Y GOP member, Meghan’s outspoken criticism of the rigidity of the Republican party has earned her both eager fans and a reputation as a political pariah. Yet it is not her extremity, but her moderate stance, that draws the most ire. She believes in gay marriage as a civil right! And that immigration is a vital aspect of American culture! She has a written a book called “Dirty Sexy Politics”! As she once stated in a speech, “I am concerned about the environment. I have a tattoo. I believe government should always be efficient and accountable. I have lots of gay friends. And yes, I am a Republican.”

For some, Meghan’s politics qualify her as a RINO (Republican in Name Only). However, for a growing number of young Republicans frustrated with Obama and the economy yet at odds with the social conservatism of the far right, Meghan is seen as somewhat of a rallying cry. For the most part, she remains frank and articulate, speaking from an independent perspective that many college students share. It’s hope anew that the future of the Republican party won’t be delegated to aging extremists whose platform is based on wielding angry signs and using words like “patriotism” and “faith” as ammunition.

Since the 2008 campaign, we’ve seen the rise, fall and resurrection of a political daughter whose media coverage has not been focused on nuptials (Bristol Palin, Chelsea Clinton) or minor misdemeanors (those wily Bush twins). And while undue focus has been placed on her pedigree and looks (though I can verify that Desert Barbie is a popular choice out there in the AZ), Meghan has deftly maneuvered through critiques with, dare I say it…humor? Surely this is not a factor in the proposed Republican “purity test”!

In a blog post for The Daily Beast entitled “Why I Hate the Politics of Hate,” Meghan writes of her disillusionment with today’s political landscape: “If this is how I feel from all of the rancor, I can only imagine how disconnected the rest of my generation must feel. If politicians aren’t inspiring people when they are young, what hope is there that they will care when they are older?”