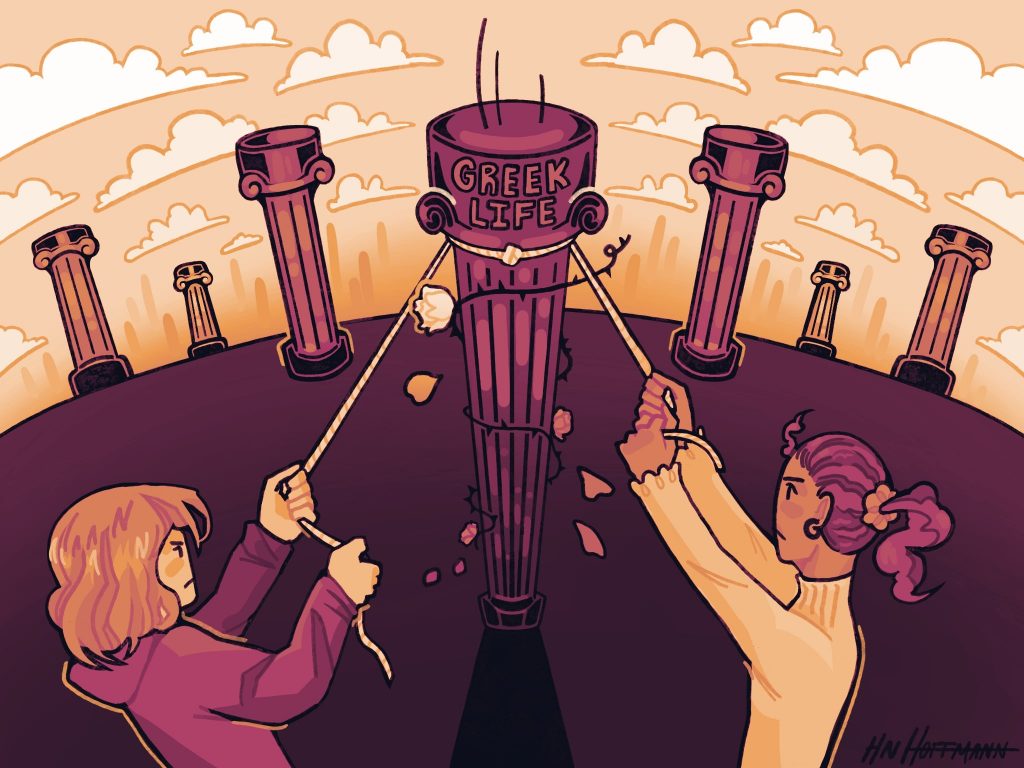 It’s that time of year again: Greek Life rush. However, it looks a little different this year due to a number of changes prompted by COVID-19. The usual campus venues, chats with older members or frantic scrambles from sorority to sorority (and fraternity house to fraternity house), have been replaced by, you guessed it, the screen. The Student Life Editorial Board strongly urges all students who are thinking about rushing to refrain. Greek Life should have no place on our campus, as it is an institution that upholds racial and socioeconomic discrimination, perpetuates a culture of interpersonal violence and prioritizes organizational reputation over the well-being of its individual members and the broader community. Not rushing is a step to ending these systems.

We understand that it has been an especially difficult school year for freshmen, who, in addition to getting used to college courses and life away from home, have had to navigate a sparse and difficult social environment. It is challenging to really get to know other students during a pandemic, and many people hope that Greek Life will be the opportunity they’ve been looking for to meet people outside of the classroom and form lasting friendships. The Student Life Editorial Board recognizes that Greek life possesses qualities that are certainly beneficial to members, with fraternities and sororities providing many members with lifelong connections and access to unique social and networking opportunities. These are understandable reasons to partake in Greek life. However, there are a number of student groups on Wash. U. ‘s campus that provide similar benefits as joining a sorority or fraternity without contributing to Greek Life’s harmful system. Whether it’s about community, philanthropy or social life, Wash. U.’s hundreds of other clubs and organizations can fulfill the role of Greek Life, giving you a similar experience. The problem with Greek Life is not the individual but with the system as a whole.

The Greek system is built upon exclusionsionary principles. As Occidental College Associate Professor of Sociology Lisa Wade wrote in Time magazine in 2017, “Young rich men invented ‘social’ fraternities to isolate themselves from their middle-class peers.” Research in recent years has shown how that legacy has yielded a system that still features vast socioeconomic and racial segregation, among many other problems.

This system of exclusion and discrimination persists into today at Wash. U., as the posts of the Abolish Greek Life at WashU Instagram account demonstrate. The account, created in the summer of 2020 following a single Instagram post about one sorority member’s racist acts, has more than 3,000 followers. It garnered over 75 student submissions beginning last July. The titles of just five posts read: “An Environment Where Hate and Assault Thrive Without Accountability,” “Pressure to Distance from Racial Identities,” “I Have Never Felt So Tokenized in My Life,” “Explicit Exclusion Based on Socioeconomic Status,” and “Drugged and Not Permitted to Deactivate.” Recently, the posts of the Instagram account @whyidropped_washu have highlighted the experiences of Greek members that led them to deactivate from their organizations. Many on the account noted poor reform efforts, interpersonal violence and lack of properly addressing concerns as their reasons for deactivating.

By not rushing, you have the power to take a position against Greek Life and all it stands for: racism, classism, homophobia and exclusivity. We encourage those thinking about rushing to do some tough introspection: Do you want to be a part of a system that harms your peers? All for a few weekend parties? A potential networking opportunity? Despite the personal short-term benefits you might gain from joining Greek Life, it is far from worth the long-term harm done to others.

There have been changes to this year’s sorority rushing process, as detailed by the Women’s Panhellenic Association in a recent Instagram post, including no registration fees, using an informal structure called Continuous Open Bidding, looser attire requirements and a required panel where Potential New Members can “ask questions, voice concerns and have an honest conversation with active members from each chapter.” The same post also detailed a list of different types of harm Greek Life “may have perpetuated,” including “institutionalized racism and socioeconomic inequality against the Wash. U. community, especially BIPOC and LGBTQIA*.” These changes are positive measures, however they are in no way near enough, and many of the transformations are due to COVID-19 restrictions and are more of a testament to performativity. The WPA statement does not address the root causes of the many issues within Greek Life, and the organization appears to be making these changes in order to survive. These changes do not justify rushing.

Additionally, there are numerous colleges that have removed Greek organizations, suggesting that abolition is possible and successful. Schools like Williams College, which abolished Greek Life decades ago, demonstrate that campuses can exist without these inherently problematic institutions. And some positive advances have already occurred on Wash. U’s campus, with Alpha Omicron Pi and Pi Beta Phi disbanding as other sororities such as Delta Gamma and Kappa Delta pushed for disbandment in the fall. (They were both denied disbandment by their national organizations.) Not rushing puts pressure on more sororities and fraternities to take these same steps and holds them accountable for their destructive actions.

Choosing not to rush on its own is not enough, but it is a necessary step to prevent Greek Life’s continuation of a flawed and harmful system. We are at a crucial time in the push to disband Greek Life, and not rushing puts necessary pressure on these organizations to reconsider their role on Wash. U. ’s campus. The maintenance of Greek life affects all students, and to those who are considering becoming members, we ask you—we are counting on you—to make this crucial and pivotal decision in eradicating the Greek life system on our campus: Don’t rush.

Our Voice: Editorial Board

Staff editorials reflect the consensus of our editorial board. The editorial board operates independently of our newsroom and includes members of the senior staff and forum section editors.