On fire and ice

I’d like to lodge a formal complaint against the University for failing to de-ice the Underpass properly. For weeks, I have been worried that one of the many menacing icicles dangling from its crevices might fall and pierce me on my way to class. (Hey, it happened on “Grey’s Anatomy.”) Fortunately this has not yet occurred; but there is a particularly slippery and hard-to-detect patch of ice where said icicles have melted. Needless to say, my knee is still bruised.

Regrettably, that was not my only encounter with slippery surfaces this week. On Sunday night, I braved the slick, rainy roads and practically nonexistent visibility to retrieve my sister from the airport. I had never driven to Lambert-St. Louis International Airport before, and generally avoid highway driving altogether, so I braved the roads with a near-death grip on the steering wheel. We both returned to campus safely, yet it was a baptism by fire of sorts, except colder.

I have slipped, fallen and triumphed this week, all in an effort to get from point A to point B. It was risky at times and full of icy pitfalls, but ultimately it was the only way to get where I needed to go. Like many of you, I have been captivated by the Winter Olympics this week. As you may have also seen, male figure skater Nobunari Oda had to interrupt his routine to fix a broken shoelace, which seriously wounded his hopes for a medal this year.

According to The Washington Post, Oda said the following about his unruly laces after the routine: “It came untied, it’s my fault, I feel guilty for myself for doing this. I will try to make sure it does not happen again.” Granted, I am unfamiliar with the intricacies of Olympic-level figure skating, yet I doubt broken shoelaces are true reflections on the skater. At worst, he failed to ensure his laces were tied properly. Mostly, however, it seems like an innocent mistake made at an ill-timed, high-stakes moment.

The question raised by these icy tribulations is one of error and risk. When should we accept blame and defeat, and when should we nevertheless push forward, despite the possibility of mistakes? I can hardly stop traversing the Underpass for fear of ice. I could berate myself for the fall, but it was relatively harmless and unavoidable, so I chose to laugh it off instead. As for driving in slightly perilous weather, it was a bit more risky but still entirely within my capabilities. I had promised my sister a ride and I wanted to learn, so I cautiously dove in, one foot on the accelerator and the other not far from the break.

But what about Oda? Where does his mistake lie?

I cannot issue forgiveness on his behalf, but I do believe he should be exempt from blame. Our ability to preempt acts of chance does not increase simply because their significance is heightened. Regardless of fault, the greater the risk, the more spectacular the fall. The important thing is to keep getting back on the road.

Eve is a junior in Arts & Sciences. She can be reached via e-mail [email protected] 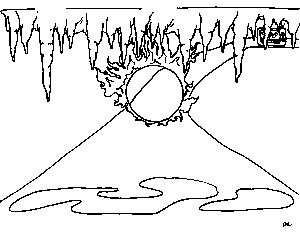