Longer break for Thanksgiving is a smart move 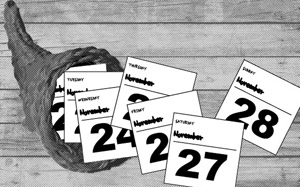 Those of us who were left feeling a bit unsatisfied with our measly Thanksgiving break can rejoice at the news that Washington University will be overhauling its academic calendar next year. Beginning next fall, the school will give students a full week off from classes for Thanksgiving and remove the fall break entirely. [Editor’s note: This assertion may be misreported, according to the University calendar for the 2010-2011 academic year.]

Granted, our fall break wasn’t much to boast about in the first place; for those of us who live any significant distance away from St. Louis, flying home for a three-day weekend is hardly feasible in terms of either time or cost. Fall break serves more as a small reprieve from the monotony of school, giving us a milestone in our progression through the semester.

Perhaps fall break seems more significant than it actually is by nature of calling it “fall break”; in high school, one day off from school hardly qualified as a “break.” Here, however, students count the weeks until they can enjoy an extra day of relaxation or fun. Fall break makes Wednesday the new Thirsty Thursday and Tuesday the new Wasted Wednesday—if you’re into that.

Ultimately, though, the end of fall break is no huge loss. Some people have no classes on Fridays anyway, which renders fall break meaningless in a practical sense. Extending our Thanksgiving break is a fantastic move by Wash. U., and many other universities have already adopted this policy; this year, I had to endure classes on Monday and Tuesday knowing that my brother and high school friends had already been home for two or three days.

The short Thanksgiving break leaves little time to spend with family and friends. For example, I arrived home late Wednesday night and spent a whirlwind three days living out of a suitcase before flying back to school early Sunday morning. Spending Wednesday and Thursday nights with my family meant that I had time with my parents and brother but sacrificed the chance to see my best friend.

A longer Thanksgiving break will also give international students the option of heading home. Under the current system, many students from other countries are forced to stay on campus during the holiday because plane tickets are simply too expensive to purchase for a mere five days of vacation, two of which presumably would be devoted to traveling. With the new calendar, however, students will have nine consecutive days in which to fit traveling and visiting. With two shorter breaks, the possibility of traveling home at all between August and mid-December is precluded for many students. Maybe I’m just immature and three more years of college will change this, but for now I’m a mama’s girl, and four months is simply too long.

A full week off in November will allow for meaningful use of the vacation time, including traveling, seeing friends, being lazy at home, eating, eating more and sleeping.

After all, isn’t that the point of a vacation?

Kate is a freshman in Arts & Sciences. She can be reached via e-mail at [email protected].