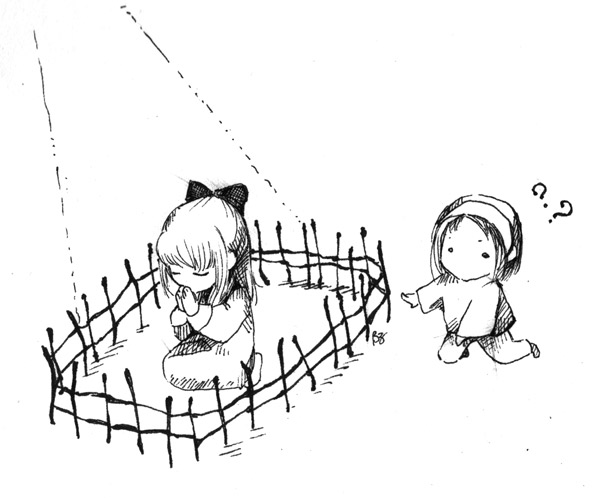 On the Sunday before Thanksgiving, some of my suitemates and I headed to the Gargoyle for what we thought was an interfaith dinner. Turns out it was a dinner for Intervarsity, an on-campus Christian fellowship…oops.

Nevertheless, the event organizers welcomed us and treated us to a nice, free dinner for which I was thankful, and my table managed to create good conversation about religion, giving thanks and the fractal dimension of cauliflower. But despite the good time, I left feeling a little uneasy because of comments made at the beginning of the event. The dinner’s primary organizer, a minister, spoke before the meal about prayer, and he acknowledged that several in attendance probably were not Christian. He encouraged them to nonetheless consider praying.

I respect the minister and his devotion to Christianity, but his suggestion that being non-Christian somehow means you don’t pray was absurd. Prayer is common to plenty of faiths. I personally have never been a Christian and might never become one, but I have prayed and will pray. True, it may have been just a slip of the tongue, and the minister likely meant to ask nonbelievers to consider praying. But what was said was said—and it bothered me because of the way it divided the audience. We weren’t students or friends, but rather Christians and non-Christians, alleged prayers and non-prayers.

Religious beliefs shouldn’t be used to separate or sequester. To admittedly oversimplify, I view religion as a bit like eye color. It is a significant characteristic that contributes to your identity but shouldn’t negatively affect your relations with others. Sadly, I find it sometimes does. In South Asia, we have Hindus against Muslims like whites against blacks. In the Middle East (and elsewhere), it’s Jews vs. Muslims vs. Christians. I would argue that religion today has become what skin color was and still is: divisive. In fact, I acknowledge that religion has historically divided humans (see: the Crusades). But is division really the goal of religion?

Religion is an individual perspective, a lens through which to view the world and its inscrutable quirks. Religion often functions as a means of tackling questions nature cannot answer—questions of morality, life after death, etc.—and different faiths usually come up with strikingly similar answers. For example, halal and kashrut—Islam’s and Judaism’s dietary laws—have much in common. When explaining my own faith of Zoroastrianism, I emphasize the parallels it has with other religions: one God and prophet, the importance of good words and deeds, and heaven and hell. And yes, Zoroastrians pray too. Clearly, common ground exists.

As students at one of the nation’s best universities, we probably spend more time considering strong coffee and finals than the Almighty and prayer. On top of this, I feel that the student body’s diversity—evident in the numerous religious backgrounds or lack thereof on campus—makes the state of religion at Wash. U. rather fuzzy. Yet regardless of your beliefs, I encourage you to appreciate religion and the role it may play in your life and identity, but not to allow it to become a barrier. That’s not what religion is about.