A school of individuals

Ah, the irony. Last week, I wrote a column calling for more debate on campus about the war in Afghanistan. The response: silence. No debate, no online comments, no e-mails, no op-ed submissions and no other apparent response on campus.

Of course, one obvious possibility is that my column last week simply wasn’t good enough to merit a response. That’s entirely possible. The pattern of commentary over my two-plus years as a Student Life columnist, however, suggests otherwise.

The only columns that seem to generate much response on campus are those that directly criticize the work of students and student groups on campus. When I wrote a column last year “eulogizing” the College Republicans, the responses were swift and plentiful. The same thing happened when I wrote about Conservative Coming Out Day last spring and when I wrote “Pretending to be President Obama” this fall.

It is natural that students would care most about their own work and pursuits; yet, the degree to which this occurs is somewhat staggering. More importantly, I believe it reflects a trend that is much broader than the Forum page of Student Life. We are becoming a campus of extreme individualists.

One particularly strong example of this individualism on campus are the often low rates of attendance at various campus programs. With so many options to choose from and a culture that emphasizes personal achievement, we become easily immersed in our own activities and have little time to explore the variety of speakers and other programs that populate this campus. Concerning ourselves with world affairs tends to fall even further down our priority list.

I think our intensely-scheduled childhoods have also played a role. After years of ballet lessons, soccer games and Future Super Special Overachievers of America meetings, many of us came into college with already-developed interests and talents that we wanted to pursue. Even when we have decided to look for new pursuits, we’ve often done so in a way that fits comfortably with the formal activities of our childhood. Though it may not be intentional, much of our time can be neatly distilled into lines for our résumés.

Maybe Wash. U. students prefer to read about national affairs in other sources. That would be perfectly reasonable, and yet I doubt it explains the silence I described. If it were true, speakers with deep expertise about national politics, like recent Assembly Series speaker Harold Ford Jr., would likely draw larger audiences.

Focusing on personal achievement is good, but we risk losing a great deal when we neglect our collective interests. We should make more time for participating in campus affairs and for educating ourselves about current events happening in the broader world.  If we do not care, who will? 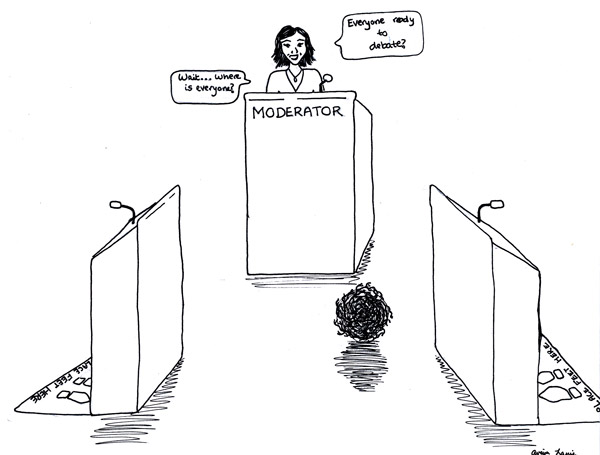