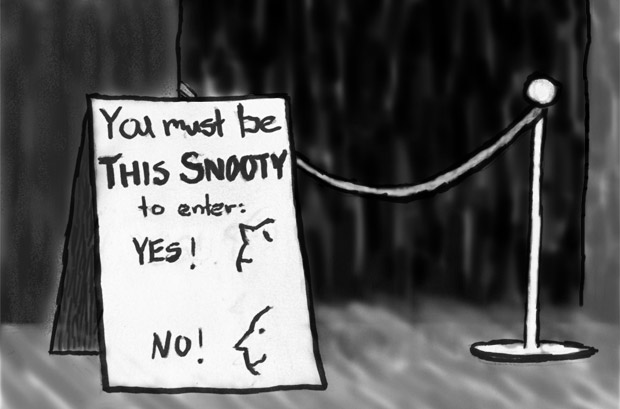 Remember that vice presidential debate in the Athletic Complex last year? All those famous people came? You know, when your mom saw you on TV, standing somewhere near Katie Couric’s assistant?

Yeah, well, save it. According to an article in The New York Times (Oct. 2), our Wash. U. credentials—star-studded as they may be—will not buy us access to the Ivy Plus Society’s meet-and-greets in New York, Los Angeles, San Francisco and D.C. Unless we have a degree from the Med School, Wash. U. alums are notably excluded from the ranks of the smart and the snobby.

As a St. Louis native, I didn’t have the prototypical senior year “Washington… as in Seattle?” experience. However, thanks to the insights of Society members such as Georgetown alum Ben Pike (he wants girls who are smart and pretty), I think I am finally catching on to the subtleties of collegiate rankings: evolution.

The Ivy Plus Society’s founder, respectable Yale grad Jennifer Wilde Anderson, told the Times: “If you wanted to describe these schools, these are all highly selective, academically rigorous institutions.” The “plus” schools have a “natural affiliation” with the Ivie, and add some geographic diversity to the list. The nominal purpose on the website states: “The Ivy Plus Society (TIPS) brings together young alumni from a select group of schools to create a community of talented, dynamic individuals. The chance to meet incredible people was one of the best parts of the top schools we were privileged to attend. We endeavor to initiate opportunities for this exceptional group to connect here in the real world, beyond the iron-gates of our alma maters.”

Natural and selective? Affiliative behavior? Survival in the “real world”? Those in the know will catch these references. Ivy Plus party-goers must have all taken (almost) equally prestigious Human Evolution classes. (At least, I would presume. And with my Wash. U. pedigree, I should probably just come to terms with the fact that there’s going to be a lot of presumption in my future.)

This isn’t about business networking, grown-up beer pong or even reminiscing about Harvard/Yale football—it’s about ensuring the next generation of pedigreed elites. As one attendee said, “It’s a singles party masquerading as a networking event. Look around, it’s clusters of guys and girls just staring at each other.”

Please keep in mind: I’m a bitter outsider whose social skills have suffered from attending one too few Dartmouth regatta parties. But with that said, I have to question why these particular guest lists are … enjoyable. Isn’t there another group you would rather invite to share in “laughing nights and parties over-flowing with fun at the best venues in town”? How does spending hours in ivy-covered halls of academia hone a collective sense of humor?

Regardless, on the TIPS hierarchy, Wash. U. alumni are not as much fun as “the Duke people,” and our U.S. News and World Report rankings won’t make up for it. Johns Hopkins alumni, however—they have something we don’t. And those who graduated from Caltech. And Cambridge.

But not Oxford. Hey, Oxford—want to throw a party?