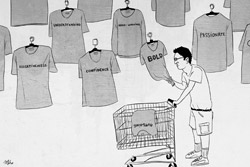 I realized the other day that there is no dignified way to climb out of a hammock. I was lying in one outside my dorm, sprawled against my most favorite philosopher, Plato (sarcasm), catching up on some reading that was long overdue. After reading about his Theory of Forms and the Shadows in the Cave, I lay there, basking in the glory of enlightenment and the afternoon sun. But I had to leave because I was supposed to go out with my friends.

Getting up wasn’t quite as easy as I had anticipated. Still scrunched in hammock posture, I tried to swing my legs over the side and climb off, but every way I moved, I turned the ropes in some ridiculous angle that made my escape impossible. I finally wound up falling flat on my derrière, gaining a dirty pair of jeans and sore tailbone in the process.

Sometimes it hurts to climb out of a comfortable place to a new one, but just as often, it is completely worth it.

My rendezvous with gravity and ancient Greece pulled my attention to memories of graduation and move-in day at Wash. U. People told me college was a place where I could be different. I could redefine myself, go from passive to assertive, timid to bold, apathetic to passionate, insecure to confident or the reverse of any of those, if I so desired.

I had a chance to transform who I was into the person I wanted to be, everyone told me, and I had every intention to do so. They didn’t tell me how hard it was going to be.

I have a tendency to be a little quieter than I’d like at times, to the extent that I don’t even express my opinion. Coming to a place where I wasn’t known as the guy to whom everyone tells their problems and who is too nice to yell at someone if they make him angry seemed like a great opportunity. I was merely a blank slate, ready to define itself according to its own terms, which is quite a refreshing and invigorating thought. I was tired of being a doormat.

Like being in the hammock, though, all I wanted to do was lie there idly and enjoy the smell of almost-autumn, clutching in my hand the toxic tome that I had learned to hate silently. Yes, it was comfortable; yes, the weather was nice, but still, “The Republic” was on top of me, its dialogues an oppressive force on my chest.

I felt similar sentiments about my compliance and whom I thought everyone else thought I was supposed to be. I have slowly developed into this person over the past 13 years, becoming diplomatic, polite, silent, saying that people wouldn’t care to hear what I had to say or that some remark was too sarcastic to actually say aloud. This attitude transformed from some convention into how I defined myself and the bed in which I lay, and a comfortable, well-shaded one at that. But still, the sting of something I hated remained in my arms, required reading for how I should think about justice and the perfect society.

Society isn’t perfect, and neither am I. While talking to a good friend about this a few chilly nights ago, she told me that I just needed to stop worrying about how everyone would perceive me and just be who I want to be, which I found quite a shock, really. Through the shivers and lamplight, I had to physically stop and examine who I wanted to be.

I think oftentimes we get so caught up with fear of how others feel about us that we stay in these molds that we, not they, think define us. It becomes our mask, our safety, our name, and we refuse to be anything more or try anything else. After all, if the breeze is blowing, who cares how many pages of ridiculous philosophy we have to read? We can’t spend our entire life in the same place because we’re too comfortable or too afraid of looking like an idiot when we try to get out. We have to get out and go further.

Yes, I hurt my butt and got dirt on my jeans and possibly made a fool of myself in front of my entire building, but when I dusted myself off and headed to the Loop, I realized that walking, unimpeded by ropes, made me so much happier.