The push for a campus free of construction 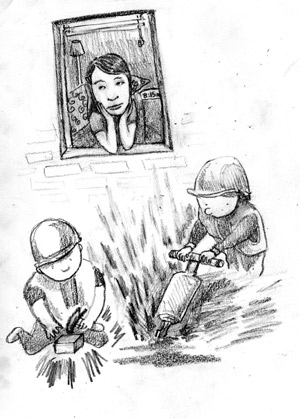 My alarm clock is on hiatus. At 8:15 every morning, I am woken by the sporadic crack and bang of loud hammering outside my window. Upon moving back to school, I was unprepared for the abrupt nature of these early mornings. One at a time, my suitemates and I emerged from our rooms in search of the cause of the knocking. In the days before these wake-up calls became a way of life, we refused to acknowledge that the construction outside our windows—which looked nowhere near complete—was the source of the noise. Since our searching hasn’t resulted in any other realistic explanation and we have yet to find a woodpecker perched on the building, we have been forced to accept the construction that shakes us out of sleep for what it is: unrelenting.

My typical nightmares of failing a test or losing an essay due to a computer malfunction have been replaced by dreams where wrecking balls crash into the wall behind my bed. While I generally welcome any distraction from my schoolwork and stress, the constancy of construction at Washington University is coming dangerously close to embedding itself in our college identity, and my bedroom window.

As a sophomore, I have never experienced a South 40 free from porta-potties and orange hard hats. The construction at Wash. U. isn’t simply part of the scenery; it is alive and insistent, as the hum of machines drowns out surrounding noise and forces those engaged in otherwise casual conversations to brace their lungs before speaking, preparing the necessary extra oxygen to yell.

Shouldn’t I be past the point of a polite nod with the neon-vested men who are more familiar to me than the boys playing Frisbee on the Swamp? I’ll admit that I haven’t yet figured out the dynamics and hierarchy of their alternating green and orange uniforms. Their vests—two shades brighter than any clothing I own, neon included—are worn presumably out of a fear that we might miss them, because dangling wrecking balls and other arrays of enormous equipment that I won’t even attempt to name wouldn’t do the trick.

Wash. U. surely appreciates the exaggerated nature of the construction’s presence on campus. How else could tour guides effectively communicate to potential students that by the time they accept their admissions offer, the University will be comparable in luxury to a four-star hotel, Tempur-Pedic mattresses and all?

Of course, Wash. U. must compete to attract students, and I’ll admit I would be lonely in my common room if the fully suited man hanging by rope to clean the windows wasn’t there to shock me out of my perceived privacy. But the bizarre phenomenon of a constantly changing campus begs the question: Will this ever end?

On a near-daily basis, we are forced to find a new route to Bear’s Bakery & Grill and the fitness center as stairways emerge from what yesterday was a heap of freshly poured cement. Dusty railings find their place among carved ramps that give way to weaving sidewalks. Walls are built up, fences torn down. I go to sleep to a pile of dirt and wake up to long stretches of grass and young plants, still misshapen from their early morning transport.

And, because there are not enough reminders of the new buildings we’re soon to have, colorful, digitized images of yet another future renovation are tightly fastened to the dorms’ outside walls. I, for one, wouldn’t object to keeping an old building or two standing, a meager reminder that our school did actually exist before the millennium.

Could this objection to the construction be just another pointless complaint amid an ever-growing list created by students who are desperate for something to criticize? Maybe, but regardless, the frenzy that surrounds the never-ending effort toward novelty should cause members of the Wash. U. community to question the University’s priorities.

When did newness become directly related to quality? And when did the quality of our living space seem to override that of our education?

I wonder if those in charge of these plans know why the majority of students chose Wash. U. I didn’t come for the South 40 House—at the time still in its beginning stages of construction—or the plans for a permanent dining facility that still doesn’t exist. I chose our school because of a speech presented prior to my Orientation tour of 10-wheeler trucks and incomplete infrastructure. The speech was given by an old dean, his hair a fading white, his three-piece suit long out of date. Thankfully, no matter how many wrecking balls it has, Wash. U. couldn’t knock him down.