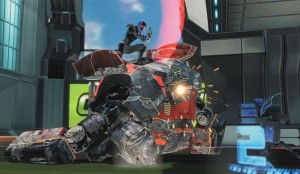 The original “Monday Night Combat” (“MNC”) remains one of the oddest genre experiments in games, and luckily it happens to be as fun as it was experimental. For those who haven’t tried it, “Monday Night Combat” is a third-person multiplayer shooter that plays like a mix of “Team Fortress 2” and “Defense of the Ancients” (“DotA”) with some tower defense thrown in for good measure. It was a secret sauce with a delicate balance in its ingredients. For “Super Monday Night Combat” (“SMNC”), the free-to-play sequel, however, developer Uber Entertainment chose to emphasize the “DotA” elements of “MNC,” a decision that has changed the game and then some. I’ve played a bit of “SMNC”’s beta, and I came away cautiously optimistic.

“SMNC” lifts the “League of Legends” business model wholesale, which is as good as it gets for a free-to-play game. There are currently thirteen classes—“pros”—available in total, with a weekly rotating roster of five available to everyone. Content such as pros, skins, taunts and endorsements—small stat boosts—can be unlocked by one of two virtual currencies: combat credits, which are earned through playing the game, and Uber points, which are purchased with money.

So far, the game seems very “League of Legends,” and it really is interesting just how much “SMNC” has embraced the “DotA” genre. For one thing, the game is now five-on-five instead of the original game’s six-on-six. On the maps I’ve played, there are two lanes that contain endlessly spawning waves of cannon fodder in the form of robots, and each team’s job is to escort these bots so that they can destroy the powerful enemy turret guarding the lane. Players take much less damage, but their health regeneration is also severely reduced. This leaves less room for run-and-gun and encourages harassing the opponents in your lane.

Respawn times grow as your level increases, and if you overextend, it’s very possible to find yourself underleveled and overwhelmed in the face of an unstoppable—“fed”—opponent. Finally, the tower defense aspects appear less prominent, as players can no longer build turrets in their base or repair the turrets already there.

The end result of these changes is a game that looks like the original on the surface but actually plays nothing like it. It’s a much more conservative game than before, and the opening portions of each match will be spent farming up gold and experience while poking at your opponents to prevent them from doing the same. “SMNC” is certainly more rewarding, and it’s shaping up to be the deeper, more tactical game. In the transition, however, I think it has lost some of its immediate pick-up-and-play appeal. A large part of that is compounded by the fact that you can no longer join matches in progress, and you are penalized for leaving mid-match.

The unequivocally great additions to the game are the new classes, which range from a gorilla in a tuxedo named Cheston to an overweight mascot wearing Mad Max gear. Much like the classes of “Team Fortress 2,” each one has a distinct personality and charming voice acting. They’re all amazingly well animated, and each pro’s custom taunts are the funniest thing I’ve seen in a long time. The maps have also seen an overhaul, and in an effort to combat the fatigue of playing in the overly similar and sterile maps of “MNC,” Uber has placed two new arenas in a jungle and a desert, which is a large improvement.

“Super Monday Night Combat” might be a different beast from the previous game, but it’s no less entertaining. If you have any interest in class-based multiplayer shooters, go register for the beta on Uber Entertainment’s site and try it for yourself.