Cast and crew of ‘Brooklyn Nine-Nine’ save the show 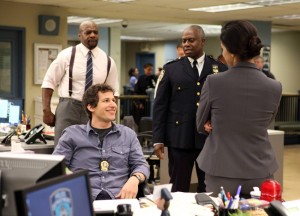 Eddy Chen | FOX
When Fox picked up “Brooklyn Nine-Nine,” I was excited for The Lonely Islander Andy Samberg to return to television. When I heard it was going to take place in a police precinct and Samberg was going to play a cop, I felt apprehensive. So how did I feel after the show’s premiere?

I’m still not sure.

For starters, pilots are always difficult, not only for the viewers but for the writers and actors as well. They have to get the introductions, setting, basic premise, et cetera, into 22 minutes. They only have those 22 minutes to hook and reel you in. While I am not sure of the best way to do this, the premise of “Brooklyn Nine-Nine” allowed the writers to spend a few minutes basically naming off characters.

When the new captain, Captain Holt (Andre Braugher) comes to the precinct, he pulls the squad leader, Sergeant Terry Jeffords (Terry Crews) into his office to have him describe the team. Jeffords then summarizes each detective with a line or two that sounds like an opinionated first blurb on a Wikipedia page. While the plot of the episode—getting a new captain—allowed for this introduction of characters, the amount of time it took to do so slowed down the show.

My second complaint with “Brooklyn Nine-Nine” revolves around the basic premise of the series. It takes place in the 99th precinct in New York, so I expected there to be some crime-solving involved. However, because this is a comedy, I figured the show would also revolve closely around the relationships and characters in the precinct itself. What I was left with was a bunch of funny characters who didn’t seem overly concerned with a murder that just occurred. In fact, while being briefed on said murder, the team spent more time discussing what sort of food was left on the face of the elderly woman who found the body than the actual detective work—“Charles thinks it was flan; I think it was butterscotch pudding.” This episode revolved around Jake Peralta (Samberg) goofily rebelling against Holt before realizing his mistake, and I was left wondering how these detectives were able to actually solve any cases.

While I was feeling uneasy about the basic premise, I didn’t want to shoot it down too quickly. After all, “Brooklyn Nine-Nine” is created by “Parks and Recreation” creator and “The Office” co-creator Michael Schur. “A cop comedy?” I kept saying, but I had to remind myself that at first, “small local government” and “paper company” didn’t exactly sound like fantastic television show settings either. I, like Fox, am putting my trust in Schur to steer this crazy boat in a proper direction.

But Schur isn’t the only person involved in the project who keeps drawing me in. I’m a fan of Samberg and Chelsea Peretti, who plays the precinct’s administrator, Gina Linetti. I think Joe Lo Truglio is hilarious and believe that Braugher is a perfect fit for Holt. The characters, albeit occasionally stereotypical, were likeable and all had certain moments to shine.

All in all, “Brooklyn Nine-Nine” was enjoyable. There were some funny lines and deliveries, and the choice for Holt to be—spoiler alert—the first gay captain was an interesting one, but what will keep me coming back is the cast and creator. Michael Schur, I’m looking at you.