‘The Voice’ back to hopefully be heard 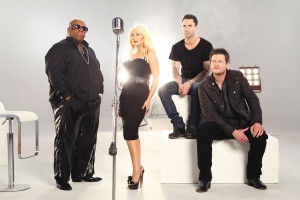 Last April, “The Voice” premiered on NBC and became an instant hit thanks to those big red chairs. Audiences were dazzled by the strange audition process, which featured four superstar judges (Christina Aguilera, Cee Lo Green, Blake Shelton and Adam Levine) turning around when they heard a voice they could just not resist. It was a sharp departure from “American Idol” auditions, and it seemed like a much nicer process. If a contestant got one yes vote, they automatically made it to the performance-battle round. If they got multiple votes, the contestant then got to choose which judge’s team they wanted to join. There weren’t really any train-wreck auditions, so it was a very pleasant viewing experience.

The show, however, was never really able to keep up its momentum. The audition episodes were the best part, but there were only two of them. The battle rounds did not feature enough singing, and the first season was just too short (less than two months long) to make an impact. When winner and runner-up Javier Colon and Dia Frampton released their debut CDs last fall, very few people even noticed.

“The Voice,” however, is back on Sunday, and it seems like it’s going to be better than ever. The season will be longer, giving viewers more time to get to know the contestants. It has added even more superstar mentors to drum up interest, including Jewel, Alanis Morissette, Ne-Yo, Kelly Clarkson, and Lionel Richie. And most importantly, the judging panel is back in full, ready to bring some more chemistry to the screen.

The show will air on NBC after the Super Bowl ends, whenever that is. This seems like a poor choice to follow the most watched sports game of the year. “The Voice” already has an established audience, and, for some reason, I don’t think its core demographic is middle-aged male football fans. (NBC probably would have been better off airing a critically acclaimed comedy like “Parks and Recreation,” which has something for everybody.) But I digress, and hopefully at least the part of the audience who watches the Super Bowl for the commercials will stay on board. “The Voice” will move to its normal timeslot on Monday, at 7 p.m. CST, where it will air week after week.