‘Black and Blue’ tackles intersection of mental illness and race

While it has risen in the public’s awareness in recent years, mental illness is still an issue that many are afraid to acknowledge in themselves and in others, especially when it comes to discussing its interactions with racial issues. This year’s Black Anthology production, “Black and Blue,” brought to light the intersection of mental illness and blackness, paying special attention to how, despite attempts to silence experience, people can recognize the need for help in ourselves and others.

As stated in the show’s program, black students who attend mostly white colleges are more likely to suffer from depression and/or anxiety disorders, which can be exacerbated by issues of racism and lack of support on campus. The fact that mental illness is often racialized—or treated as something that only white people experience—can lead to greater stigmatization, especially in the black community. “Black and Blue” thoroughly addressed these issues in a story following a black woman named AJ, a college senior and resident adviser suffering from undiagnosed depression. 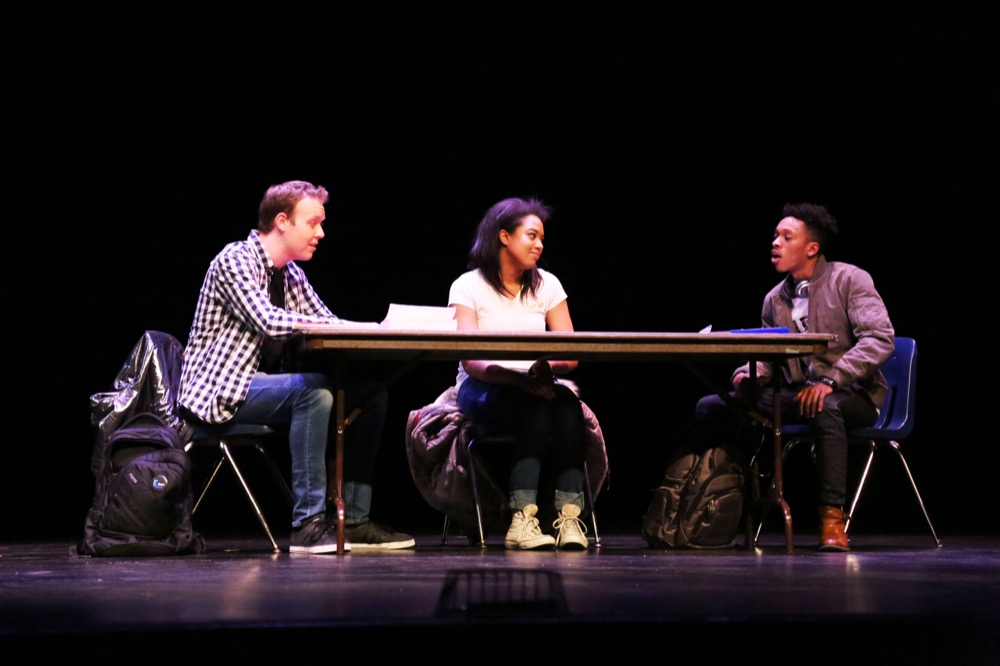 Liam Gibbs (left), Tiffany Powell and Terell Long sit at a table in the skit portion of this year’s Black Anthology: Black and Blue production. The skit addressed themes of mental illness, sexuality and blackness through the life of college senior AJ, played by Powell.

I’ll admit that I initially found the storyline of this year’s production to be loose and disconnected—I struggled to pinpoint a main cause for the main character’s depression. That very confusion, however, seemed to be exactly what the production was trying to portray—the idea that a mental illness like depression does not have a single cause or trigger was something “Black and Blue” portrayed very successfully.

Throughout most of Act I, it is difficult to pinpoint that AJ has serious depression at all. The production opens with her dreading the oncoming semester, a sentiment echoed by several snaps from the crowd. As she describes later in the show, we see the “wave of sadness” “sneak up” on AJ just as she does—unexpected on the surface but understandable as we gain more background knowledge. She starts skipping classes and staying in bed. Halfway through the act, the audience and the characters come to realize that they’ve barely seen her at all.

The difficulty to identify her mental illness, both on her own part and on the audience’s, accurately portrays the issue of visibility that something like depression has in a person’s outward performance and in public conversation. Her friend Gabe is the first to notice it, while her mother and others brush it off as “tantrums” or laziness. Gradually, the audience and other characters notice her absence from the stage and other signs, such as the growing disarray of her dorm room. AJ herself becomes scared of her depression but remains more scared of seeking outside help. By the time she does, she has been hospitalized.

The way the show presents that illness’s interaction with blackness is similarly subtle but powerful—at one point, AJ remarks that “it’s difficult to talk about brutality against black bodies” and experience the effects of depression at the same time. In another scene, a character insists that slavery and the Amistad Rebellion should be ignored because they are no longer visible, an eerie echo of the silencing black students may feel on predominantly white campuses when it comes to both issues of race and mental health.

By providing scenes from the point of view of other characters—AJ’s friend Gabe and a black, queer student with generalized anxiety disorder named Tariq—the show also speaks to audience members who, even if they do not suffer from mental illness themselves, may be able to recognize signs in others. In one scene, Tariq speaks with his group therapy leader, Kevin, about how to help AJ, providing an opportunity to list a number of mental health resources on Wash. U.’s own campus and to highlight the possibility of anonymous reporting. Gabe is shown defending AJ’s depression to a doubtful girlfriend and her friend, Q, who seek to trivialize it. The importance of personal and professional support is highlighted several times over.

Overall, “Black and Blue” manages to address an incredibly difficult and complicated topic in a show that possesses overwhelmingly hopeful undertones, echoed in the progression of emotionally choreographed dances throughout the two acts. It effectively and accurately portrays mental illness and encourages its visibility in the black community through its focus on the necessity of support and the need for acceptance as a prerequisite.