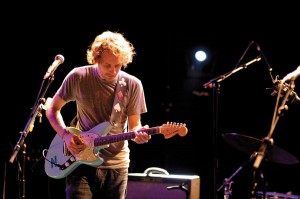 For fans of: Dawes, Dead Confederate

To encourage Wash. U. students to check out local shows, Cadenza presents our new weekly feature, “Now Hear This!” in which we preview an act that will be playing in the 314 over the weekend. We realize that our readers are college students and, thus, often poor, under 21 and lacking a car. Therefore, we will strive to suggest acts that students can afford and reach. They’re pretty awesome, too. First up—Deer Tick.

A Tampa reviewer wrote that a recent Deer Tick show whipped band and fans into a “redneck chaos.” If the group had been from Jacksonville or Macon, they might have been classified as Southern rockers, but the Rhode Islanders are just as often catalogued into the folk scene. While musically they’re an amalgamation of the two genres (plus a little country and blues thrown in for good measure), look forward to a rowdy rock show this Sunday.

Concert-goers can expect a whiskey-drenched, barnstorming band who, besides playing their own formidable material, cover everyone from Hank Williams to Chuck Berry to The Sex Pistols. Prodigious frontman John McCauley’s raspy vocals, both snarling and pleading, are the perfect complement to the band’s aggressive blues, and though his voice may be haggard and the guitars all fuzzed out, both lyrics and music are incisive.

It’s hard to tell what Sunday will bring—the band might break into an extended jam, they might play it hard and fast, or they might show up completely hammered. Either way, head out to Off Broadway and raise a Jack on the rocks to the vanguards of Southern rock.